Readers of the telegram-channel “MotolkoHelp” drew attention to the fact that in Belarus it is more and more possible to find cigarettes produced in Russia, Ukraine and Uzbekistan. And they appeared after BAT stopped relations with Grodno Tobacco Factory Neman last year. The editors of motolko.help have collected what is known about this situation.

In mid-September 2021, media reported that British American Tobacco suspended cooperation with the Grodno tobacco factory Neman due to the imposed sanctions of the United States and Great Britain. The company explained: “The impact of international sanctions, the entry into force of which is well known, on the conduct of economic activities is complex and needs proper legal analysis, which is what the BAT group of companies and BAT Belarus are doing now.”

Fearing an unintentional violation of international law, the company suspended certain financial transactions until the situation was clarified. The company’s management stressed that the BAT group of companies will continue to closely monitor the development of the situation: “We intend to provide up-to-date information regarding the planned actions in accordance with the policies and procedures of the BAT group of companies.”

British American Tobacco has been operating in Belarus since 1995. More than 300 people work in 12 offices across the country today. In 2005, on the basis of GTF Neman, the production of cigarettes under the BAT of such brands as: KENT, Rothmans, Pall Mall was launched. According to the British iNews, GTF Neman accounted for 70% of sales of tobacco products to Belarus. Thus, the decision of British American Tobacco to officially stop the production of cigarettes under its brand at the Neman factory means that they can no longer produce cigarettes under the BAT brand in Belarus from September 2021.

In mid-December, a few months after the BAT decision, cigarettes under the BAT brand produced not in Belarus began to appear there. Manufacturers indicate two addresses on packs of cigarettes that can be found on sale: in Ukraine and Uzbekistan or in Russia and Uzbekistan. In Uzbekistan, it is JSC JV UZBAT A.O. Uzbekistan, Tashkent, Minor 77; Samarkand branch, Samarkand. P. FARHAD. Readers of the telegram channel “MotolkoHelp” sent photos of cigarettes brands KENT, Pall Mall, Rothmans, made in Uzbekistan. 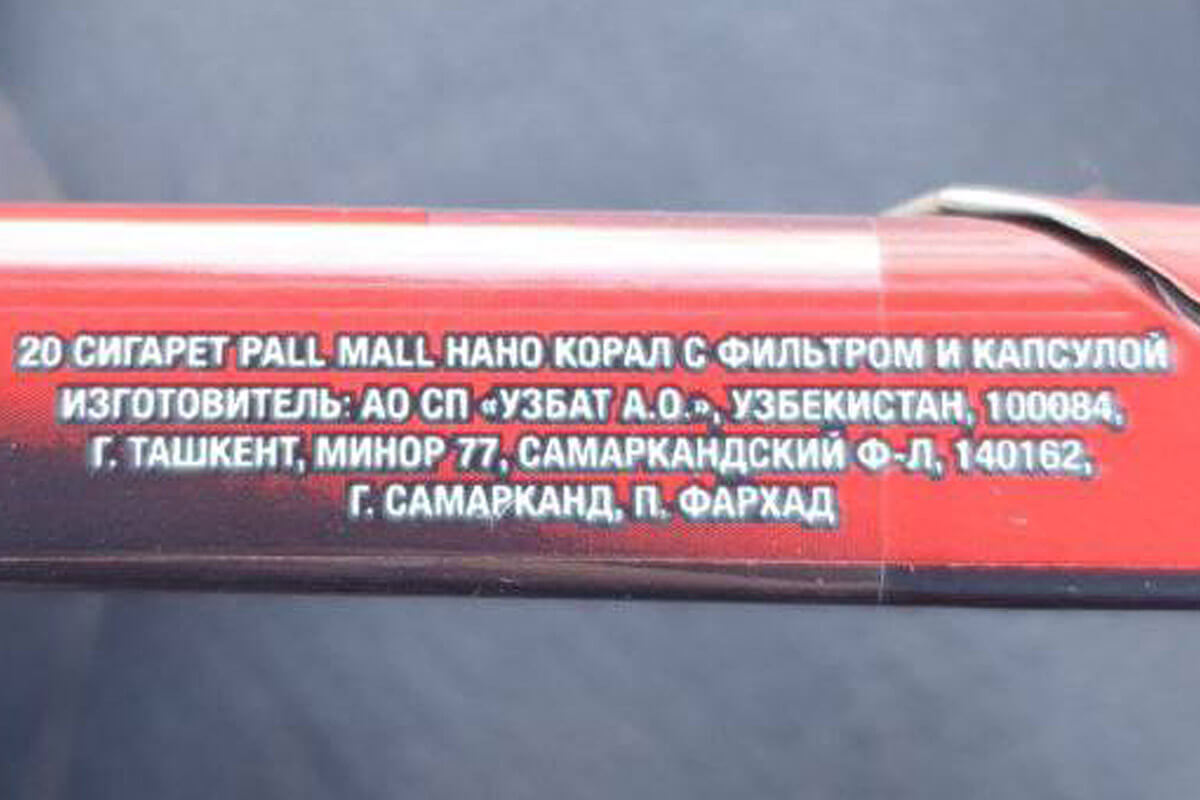 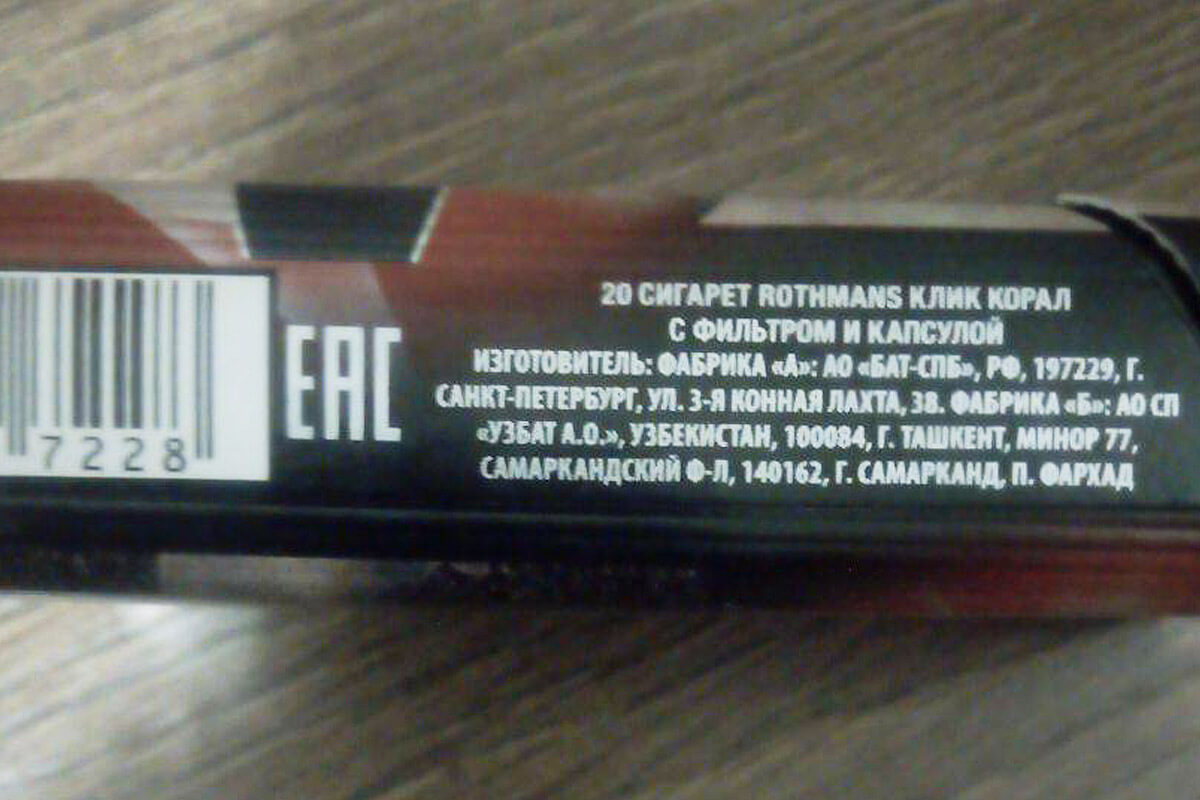 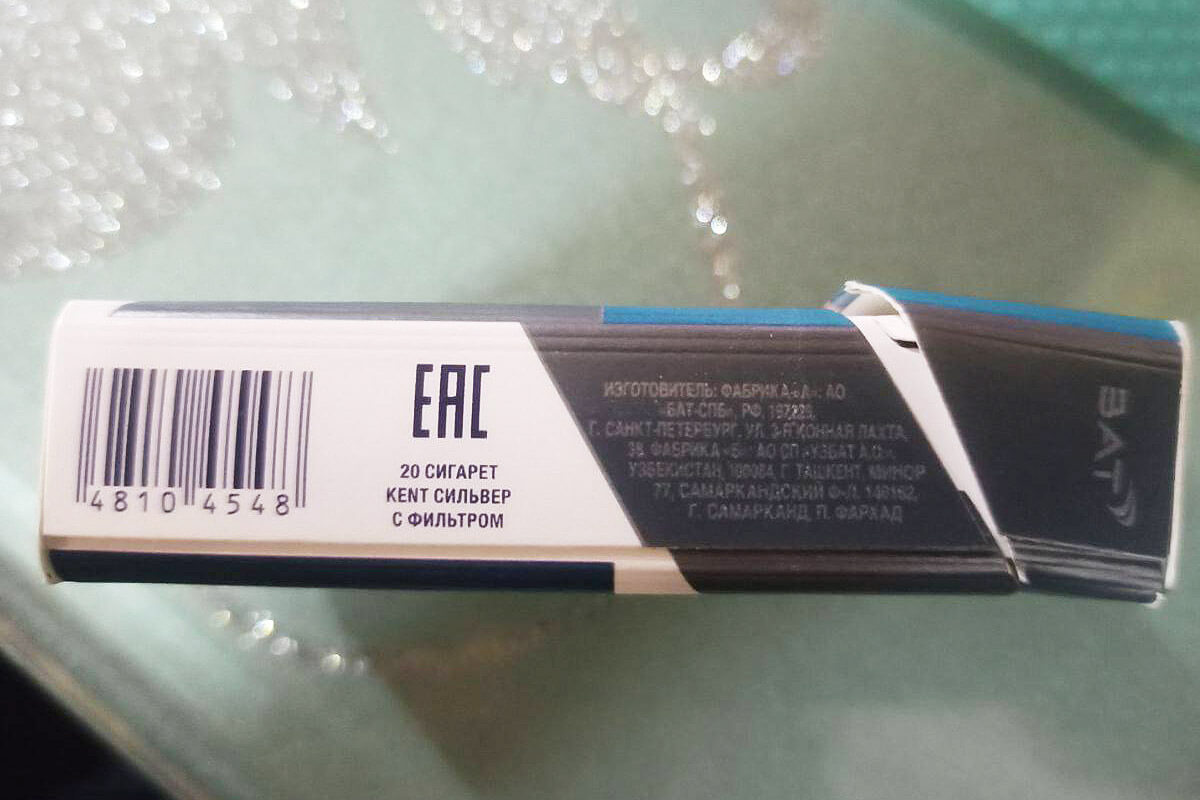 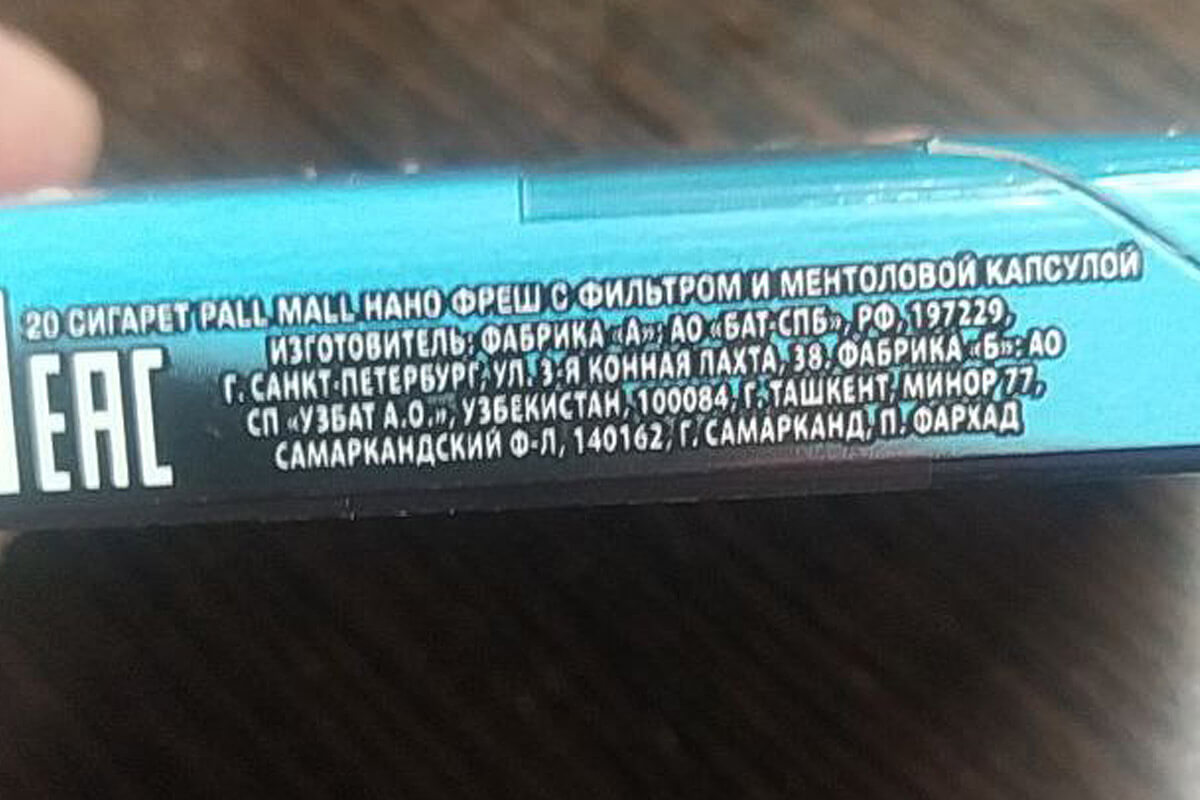 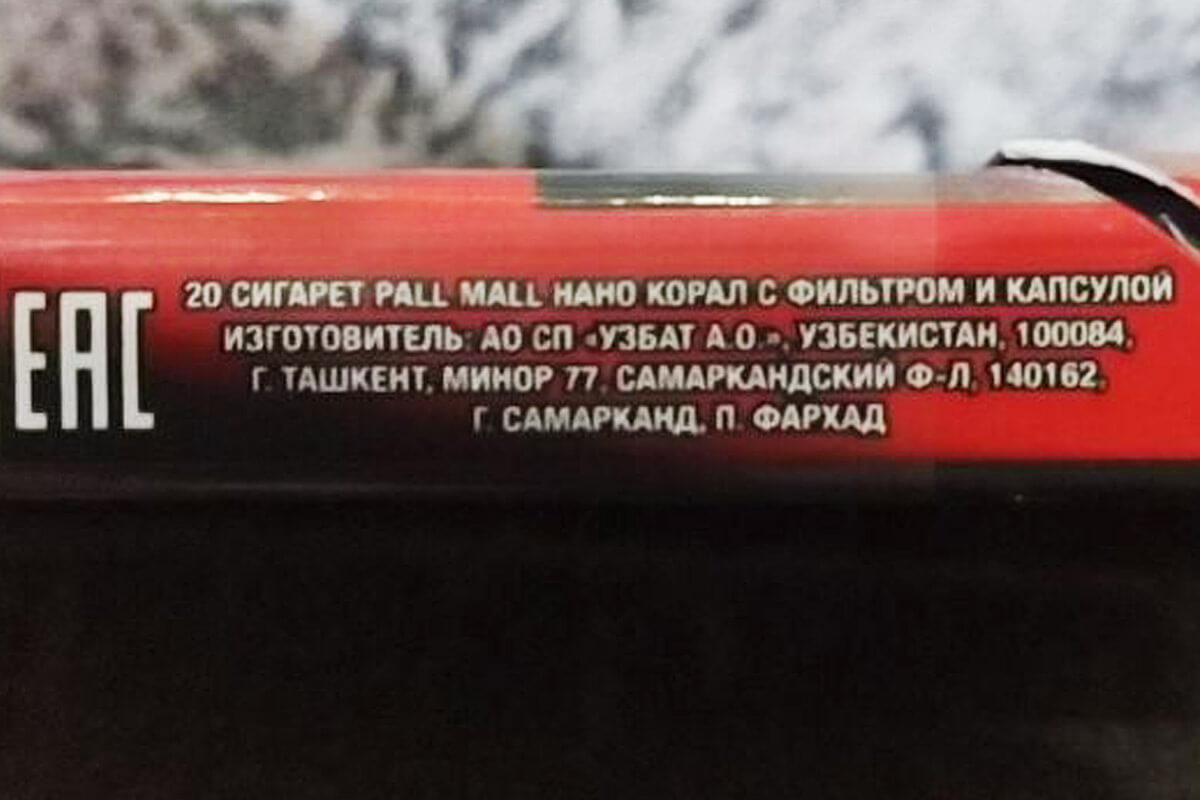 British American Tobacco Uzbekistan has been operating in the Uzbek market since 1994. Today, more than 1,000 people work there. This is more than in Belarus. It produces cigarettes of such brands as KENT, Pall Mall, Rothmans and Viceroy. Most of them are produced at the Samarkand cigarette factory. The same one from which cigarettes are supplied to Belarus.

However, we could not find official information about the beginning of cigarette supplies from Uzbekistan to Belarus. And in general, there are practically no publications on the cooperation of the tobacco sector of Uzbekistan with the Republic of Belarus. One of the few reports dates back to November 2020, when Uzbek media reported that the company UZBAT A.O. shipped the first batch of nicpacks (nicotine bags without tobacco- motolko.help) to Belarus in the amount of 120 thousand dollars. Earlier, the company invested $1 million in the shop for packaging nikpacks.

In addition to cigarettes from Uzbekistan, cigarettes under the British American Tobacco brand produced in Ukraine also began to appear in Belarus. Judging by the photos sent by readers of the telegram-channel “MotolkoHelp”, these are cigarettes of the Pall Mall brand. 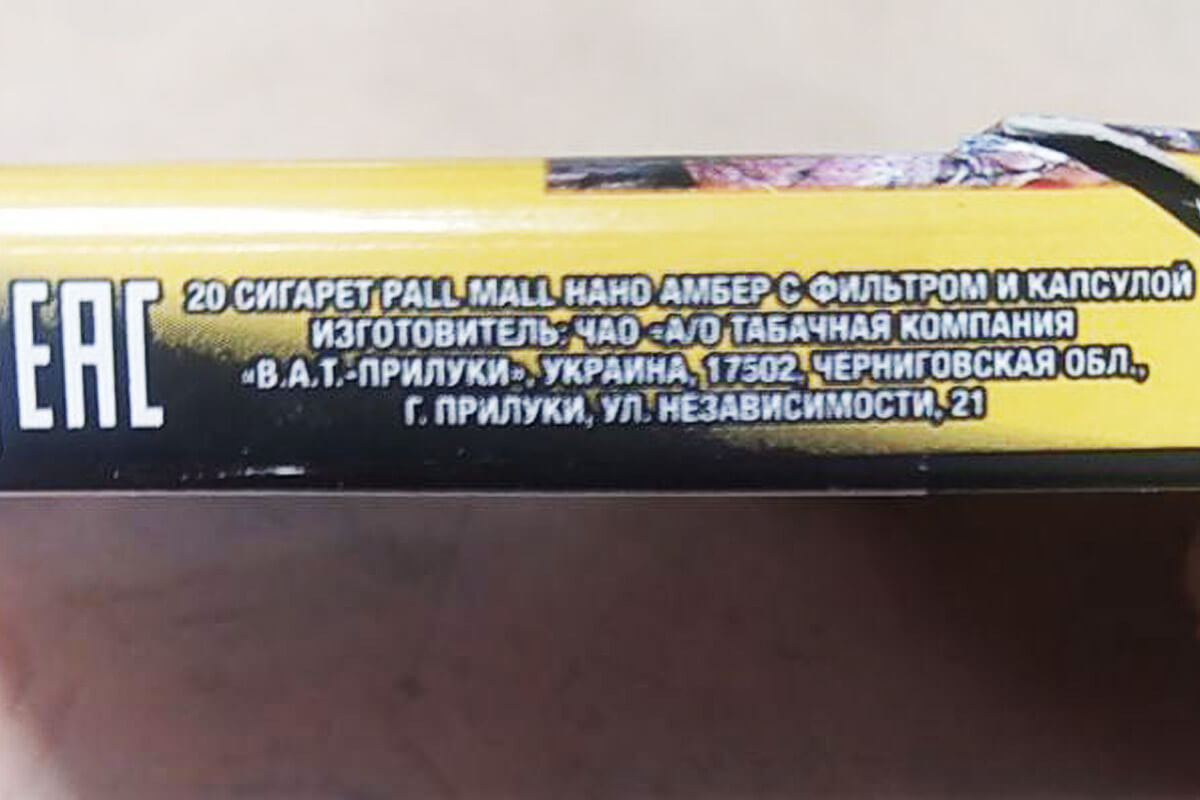 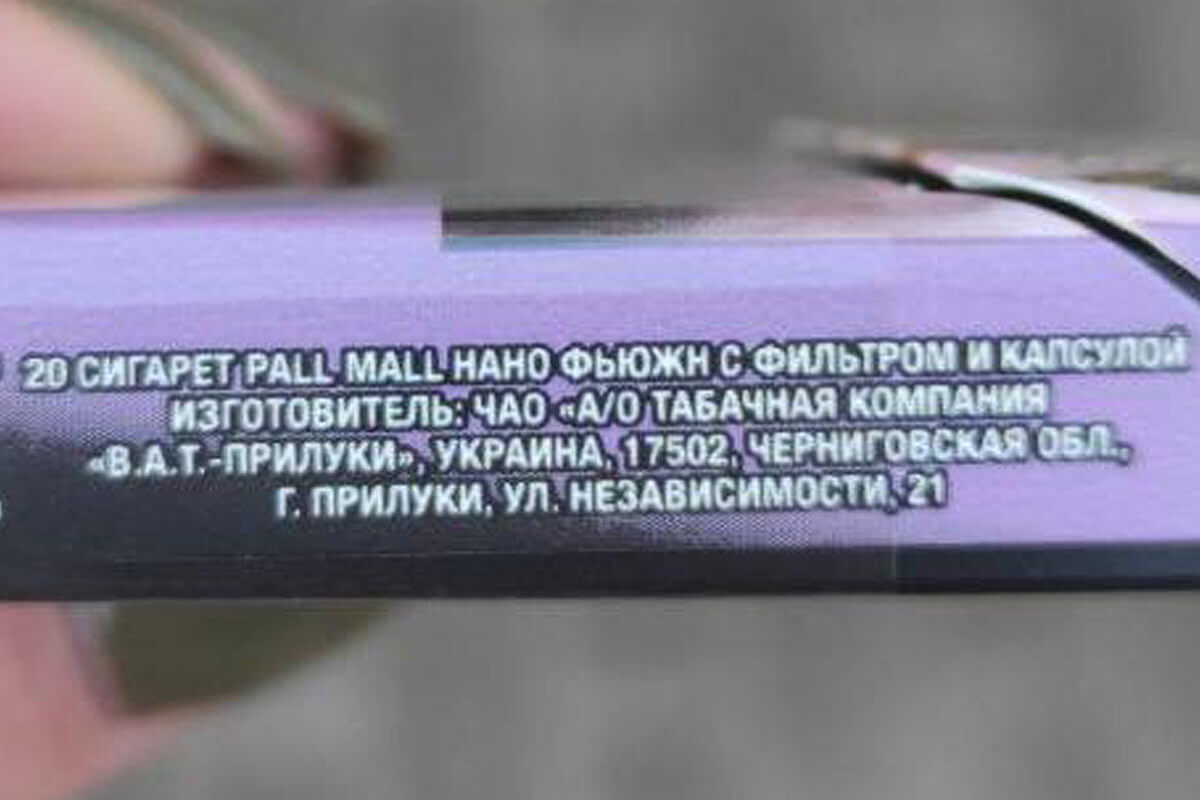 The Ukrainian address indicated on the packs of Belarusian cigarettes belongs to the company British American Tobacco Ukraine. The company has been operating in the country since 1993 on the basis of the Priluki cigarette factory. It produces such cigarettes brands as KENT, Rothmans, Pall Mall, Vogue, Dunhill, Lucky Strike and Capri. However, in this case, it is stated on the website of British American Tobacco Ukraine that the company’s products are exported, including to Belarus.

Rabochy Rukh: GTF Neman is moving to Azerbaijan because of sanctions?

It is worth noting that in September 2021, the association of workers of Belarus “Rabochy Rukh” reported that the GTF Neman was planning to send one of the 13 lines for the production of cigarettes to Azerbaijan. It is not possible to confirm or deny this information yet.

If you have any additional information about the current state of the tobacco market and production in Belarus , please write us to @motolko_bot or via the contact form below.

"Nashy Groshy": the national debt has grown. How does it relate to dollar keeping?

Shootout on Yakubovskogo: KGB officer and resident of the house were killed

“Nashy Groshy” on the dynamics, taxes and future in the IT industry