On February 24 at 6:20, the monitoring team of the Belarusian Hajun Project recorded the first missile launch from the territory of Belarus against Ukraine. Subsequently, at least six more launches were recorded until early March. The small number of missile launches during the first days of the war is also confirmed by the visualized chronology prepared by the project’s team. It seems like at the beginning of the war the Russian Armed Forces were checking the reaction of other countries to the bombing of Ukraine from the territory of Belarus.

Since the beginning of March 2022, in addition to more frequent missile launches, there were active flights of attack and fighter aircraft, from which missiles were also launched. It is notable that aircraft launched missiles not only from the territory of Belarus, but also after crossing the border, already on Ukrainian territory, especially often over the uninhabited part of the Chernobyl zone. Notably, the fixing of launches often occurred after the monitoring group recorded the takeoffs of fighters, which most often took place in stages: first from the military airfield in Lida (Grodno region, Belarus), and then, after some time, from the military airfield in Baranavichiy (Brest region, Belarus), then, and last, from the airfield in Luninets (Brest region, Belarus).

This order of takeoffs allowed the Air Force to simultaneously approach the southern districts of Gomel region: Mazyr, Yelsk, Khoiniki, or Naroulya, and from there to launch missiles. Sometimes the departures were observed from only one or two airfields, but the sequence of takeoffs remained unchanged.

According to our observations, the main location for airborne missile launches was the Mazyr district of Gomel region. This is evidenced by the fact that the time of aircraft approach to Mazyr coincides with missile launches from the same area.

However, most often the missiles were launched from the ground. For example, the Russian Armed Forces widely used Iskander missile systems. A scheme was also used in which missiles were first launched from the Iskander system and only after Iskanders had ceased fire, airplanes were taking off. Obviously, this was done in order to avoid being hit by “friendly fire.” There were also recorded days when launches were made from fighters first, followed by missile launches from the ground.

Iskander missile launcher in the Kalinkavichy district near the village of Hulevicyi on ImageSat International satellite images, March 8 / ImageSat

A-50 airborne early warning and control aircraft (based on IL-76) played a huge role in the shelling of Ukraine. Our monitoring team detected four of them in Belarus. All were based at the airfield in Baranavichy and worked in the sky alternately. Such aircraft performed reconnaissance, after which there was immediately an active phase of preparation and departures of aircraft or helicopters, as well as missile launches.

An important detail is that the missiles were launched from the ground or from the air mainly at night or in cloudy conditions. This was done to make it harder to track the trajectory of missiles, as well as to quickly determine the type of weapons used, which, in turn, would make it possible to understand the approximate range of the flight. In addition, things were further complicated by the fact that various radars operating in the border areas of Belarus with Ukraine periodically interfered with the mobile Internet and prevented the prompt reporting of missile launches from the ground or air. For example, a radar station of the Russian Armed Forces was deployed near Mazyr, 2 km from Mazyr railway station. In addition, radio-electronic warfare aircraft – “old” IL-22PP, but equipped with modern suppression equipment – were constantly in the Belarusian sky.

During the period from March 15 to 21, the cloudiness during daylight hours decreased significantly and, as a consequence, launches on these days were made mainly at night.


On March 22, 2022, eyewitnesses could first record an airborne missile launch. Later in the sky, where the launches of airborne missiles were made, many trails of aircraft were also seen, which indicated that fighters were circling over the territory of Belarus waiting for the right moment to launch (order from A-50) before the missile launch. 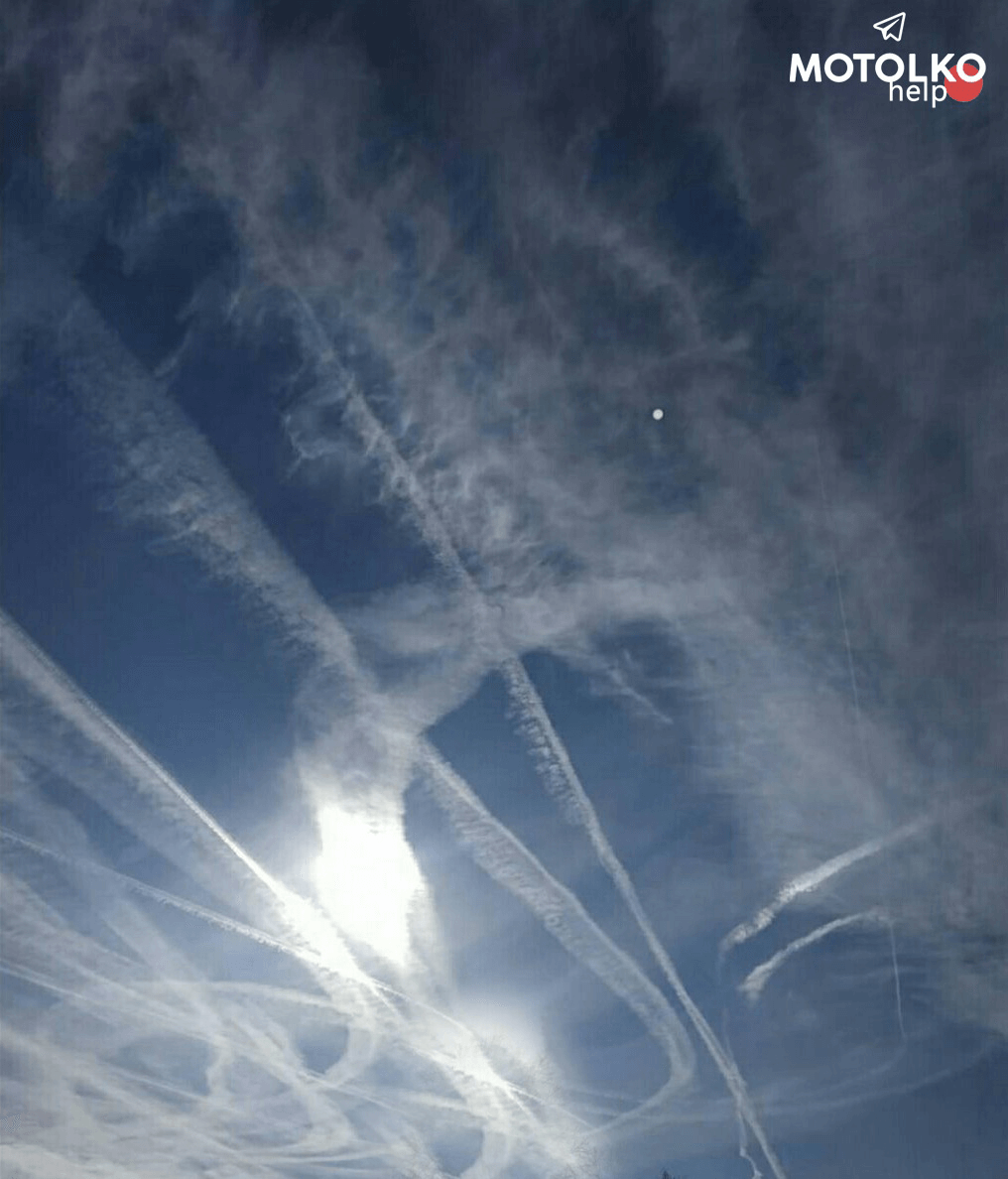 By the end of March, it became clear that the Russian Armed Forces were planning to redeploy, rotate or retreat their troops, as evidenced by the fact that some aircraft were relocated back to Russian territory. Since March 25, the monitoring team of the Belarusian Hajun Project noticed that fighter aircraft, which were launching missiles, began to fly into Belarus directly from Russia. Planes took off in Russia and entered Belarusian airspace near Krychau (Mogilev region, Belarus), flew over Rechitsa (Gomel region, Belarus) and conducted launches over Mazyr. At the same time, the number of departures from Lida significantly decreased, which also confirms the fact that some aircraft had been relocated to Russia. Fighters from Lida were based at Seshcha military airfield (Bryansk oblast, Russia), where satellite images recorded an increase of aircraft by the end of March. It is possible that fighters flew from Russia to launch missiles over the territory of Belarus earlier, but it was only possible to accurately detect several of them flying over Krychau on March 25.

Targeted missile launches by Russian fighters over Belarus can be explained by the simple “safe zone” for these aircraft, as Ukraine has repeatedly stated that it will not respond with fire to attacks from Belarusian territory because it understands that Russia is using this territory to draw Belarus into the war. By the way, this is one of the reasons why the “blitzkrieg” failed, since Russia has not yet managed to force Belarus to introduce its troops into Ukraine.

The first peak of launches was recorded on March 9, 2022, with at least 35 missile launches on that day. Until the beginning of April, the launches continued to increase day by day, and the heaviest bombing from Belarus hit Ukraine on April 1. On that day, missiles were launched literally every 10 minutes, with a total of at least 56 warheads, which covered the retreat of the Russian Armed Forces from the territory of Ukraine. It should be noted that such cover is a standard practice in wartime and has been used before in history.

After the Russian Armed Forces began their retreat, they left behind not only destroyed cities in the north of Ukraine, but also huge mined areas in the areas of Belarus bordering Ukraine. This area is currently being demined by the Ministry of Defense of Belarus. We can assume that mines and tripwires in the forests were set up to prevent Russian soldiers from deserting and fleeing back to Belarus, and subsequently to cover their back during the retreat.

After the withdrawal of Russian troops, missile attacks on the territory of Ukraine from Belarus stopped for a short period of time. This was probably due to the relocation of the main forces and equipment from Belarus to Russia. The relocation also took place inside Belarus, so S-400 missile systems that used to be stationed at Luninets military airfield are now stationed at Ziabrauka military airfield (Gomel district, Belarus). In addition to S-400, Iskander missile systems are stationed near Ziabrauka and continue to make missile launches to this day. This is also confirmed by the fact that after one of the missile launches, several trucks with containers (probably already empty) in which Iskander missiles are transported left the territory of Ziabrauka.

It is important to mention that sometimes it is difficult to determine exactly what missile systems were used for launches, but the movement of Tochka-U tactical missile systems was observed on the territory of Belarus in addition to Iskander systems. One of the possibilities for detection were trailers carrying containers for Iskander missiles. They were moving mainly to the territory of the military airfield in Machulishchy, where the Russian Air Force’s IL-76 and An-124 cargo aircraft arrived, which were the main transport for delivering the systems and ammunition for them.

In the same way 3 Tochka-U tactical ballistic missiles were brought to Belarus, we have previously published photo/video and audio evidence of the delivery of these systems to Belarus. In addition, the monitoring team of the Belarusian Hajun Project has numerous satellite images, which clearly show when and which missile systems were located in the areas of Kalinkavichy, Luninets or Ziabrauka. We also know that almost all of the missile systems changed their location after a series of launches, which was done in order to complicate the identification and fixing of the launch.

In conclusion, we note that missile launches from Belarus against Ukraine took place not only from the territories of Mazyr, Kalinkavichy, Khoiniki, Yelsk or Naroulya districts, but also in the Svetlahorsk district (Gomel region, Belarus) and near Luninets (Brest region, Belarus).

At least 633 missiles have been launched against Ukraine from the territory of Belarus since the beginning of the war. And the most important thing is that missile launches continue to this day.

If you know positions of missile systems of the Russian or Belarusian Armed Forces in Belarus, you observe the movement of military equipment, or have other useful information, please contact us via @HajunBYbot.

Report of mining the building where Mikalai Dziadok, a political prisoner, was tried