Yesterday it became known that Ivan Krasouski, one of the most famous Belarusian extremes, died from complications of COVID-19. In 2018, he suffered a shoulder injury, a log with a diameter of about 8-10 cm got stuck in his right shoulder when he crashed into a tree.

The publication “NashaNiva” reports that his son Ivan Krasouski Jr. is a political prisoner who in August 2020 got to Akrestsina, where he was tortured and then spent two weeks in a wheelchair. His story was told in detail by human rights activists.

The man said that when he was brought to Akrestsina, they threw him out of the van, removed the handcuffs and began to beat him: they beat him for a tattoo, beat him for bracelets, beat him for his shaved hair.

“They made me shout “I love OMON.” Initially, I said, “I don’t like fascists.” After that, they got angry, they beat me for probably a minute without a break. After that, I realized that I needed to obey them, I did everything they asked for. I shouted “I love OMON.” They beat me anyway. While my vocal chords were not torn, I shouted “I love OMON.” They stopped beating me, they started saying: “Shout “Long Live Belarus!” I did not shout “Long Live Belarus!”, Because I understood that I would most likely also be beaten. They beat me anyway. I shout: “Long live Belarus!” – they start beating me again. Then they started shouting “Hanba! Hanba!” [shame- ed.] – they also beat me,” Ivan said. 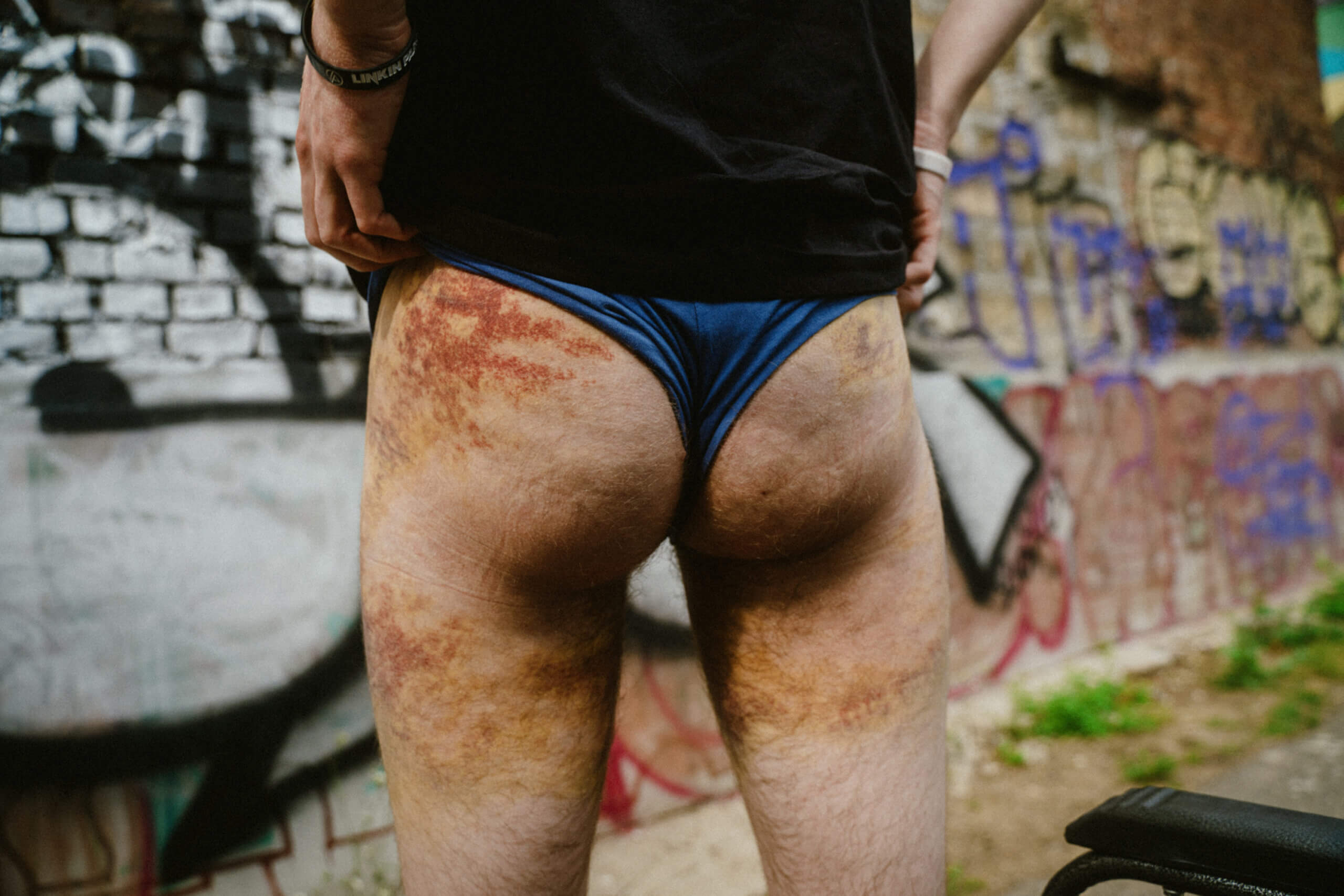 The body of Ivan Krasouski after Akrestsina and the hospital / Photo: MaksLongLive

He was taken from Akrestsina by ambulance and taken to the hospital in Baraulyany, where he was diagnosed with a severe bruise of the hip bone, numerous complicated hematoma on the buttocks and legs. After that, the man spent about two weeks in a wheelchair.

The second time Ivan Krasouski was detained on the evening of September 24 in Minsk, on the way to the metro from a friend with whom he lived. On the afternoon of September 25, it became known that a criminal case was initiated against Ivan. He was accused of participating in mass riots accompanied by violence against the person, pogroms, arson, destruction of property or armed resistance to representatives of the authorities (Part 2 of Article 293 of the Criminal Code of the Republic of Belarus). Allegedly, he blocked the road near the shopping center “Riga” on the night of August 10-11, 2020.

However, later the case was reclassified to Part 1 of Art. 342 of the Criminal Code of the Republic of Belarus – “Organization and preparation of actions that grossly violate public order.” Ivan was sentenced to 3 years of “khimiya”, but he managed to escape from the country. He will not be able to come to his father’s funeral.

Media: Belarusian athletes at the Olympics can communicate only with media accredited by the NOC

Lukashenka said that he had coronavirus again

Concert of Maruv, who refused to participate in the Slavianski Bazaar, canceled in Minsk