Today, a press conference was held in Vilnius, at which the leaders of the democratic forces discussed the future strategy of action at the “referendum” on amending the Constitution, which will be held in Belarus on February 27, 2022.

“Yesterday, the regime announced an illegitimate “referendum.” It is an attempt to retain power, but it does not solve the political, economic or humanitarian crisis and problems of the people. It is not a choice between “for” and “against,” Belarusians are offered a “choice” between Lukashenka and Lukashenka. And this is not what the Belarusians have fought for and continue to fight for. Belarusians want normal life, security, and freedom. Belarusians want new fair elections. This is the only way out of the crisis.

We urge citizens to come to the polling stations and take action with the ballot: to invalidate it by crossing out all the choices offered. And to confirm their decision through the “Golos” platform – this will allow us to show the real situation at each polling station in each city.

We were prepared for such a scenario. Yesterday we have already sent letters on behalf of my Office, the Coordination Council and NAU to all international partners. We called not to recognize the so-called “referendum” and to support the demand of Belarusians to release political prisoners and hold new elections. And to increase pressure on the regime in case the repression continues.

Today we announced the launch of the operational headquarters of democratic forces for the campaign period. Office of Sviatlana Tsikhanouskaya, National Anti-Crisis management, Coordinational Council, Honest People, Zubr, ByPOL and many other initiatives will work together the following month, and will gather in the same office in Vilnius a few days before referendum.” 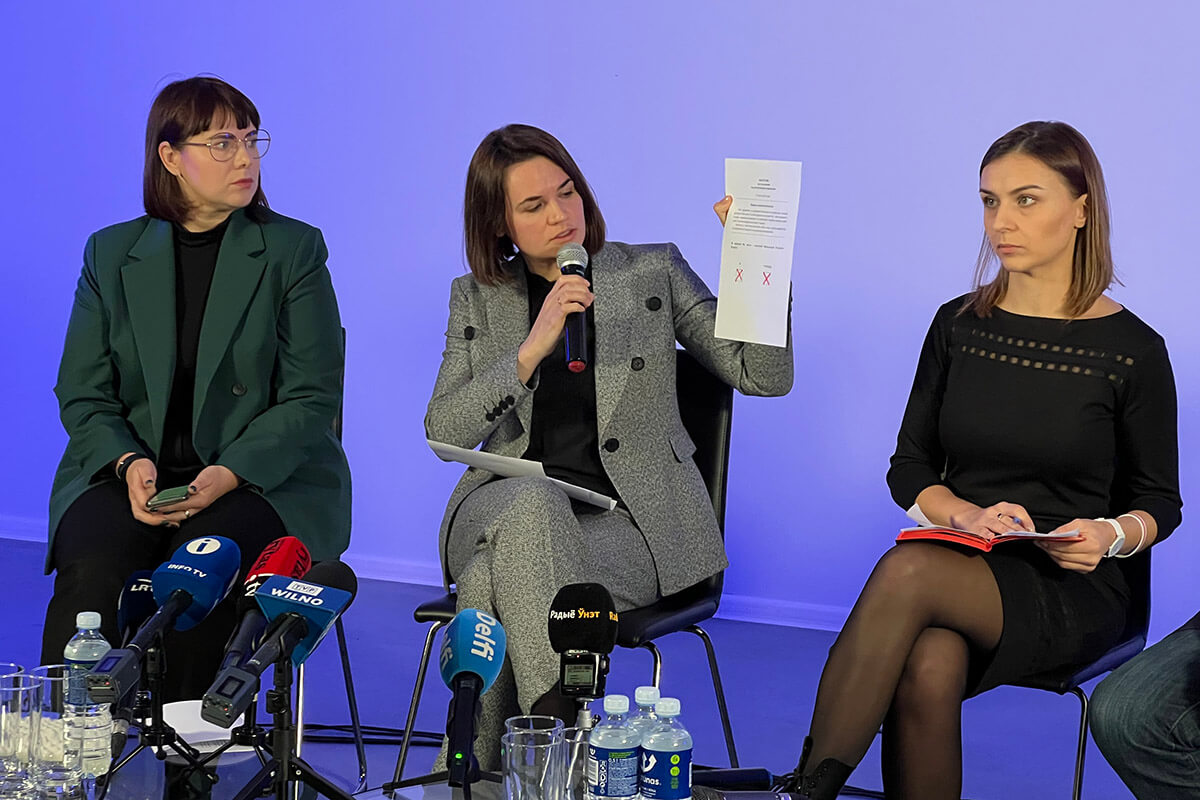 In her speech, Volha Kavalkova stressed that the authorities still continue to be afraid of Belarusians, as evidenced by the incessant repressions. In her opinion, the amendments to the Constitution are ideological in nature and do not contribute to the resolution of the crisis that has developed in the country. “In the short term, the adoption of the Constitution freezes the current situation, and in the medium term, it creates the prerequisites for a new serious crisis,” Kavalkova said.

Pavel Latushka, the head of the National Anti-Crisis Management (NAU), supported the general strategy of democratic forces. Among other things, he spoke about the presence of the Russian military in the country.

“NAU considers the presence of the armed forces of the Russian Federation on the territory of Belarus, which was agreed upon by the illegitimate authorities in Belarus, to be a violation of international law. In the current situation, the presence of troops poses a threat of a military conflict with the neighbors of Belarus, as well as the loss of the sovereignty of Belarus,” Latushka said.

The representative of the “Honest People” initiative Elena Zhivoglod noted that coming to the polling stations and making the ballot invalid is not equal to voting: “Such an action means that we take the opportunity and have the right to say what we think, despite the fact that we are forbidden to do it in Belarus.”

“We are working with members of the election commission and invite even those who have already been pressured before the date of the referendum and asked to join the election commissions. We suggest not to refuse. The logic is very simple: if you do not agree, the regime most likely will persuade someone else to become a forger. Therefore, we urge you to witness and cooperate with us and tell us what is happening inside,” Zhivoglod said.

Let us recall that on January 18, the initiative “Honest People” published a transcript of one of conversations, in which the future member of the election commission was promised that everything would be according to the law.

The representative of the “Golos” platform Pavel Liber noted that on the one hand, it will be much easier for his initiative this year  – there is no need to prove the fact of falsifications, all Belarusians have already understood how it works. But at the same time, he spoke about the difficulties: “Since 2020, the regime has become tougher, society has become more intimidated by this regime. We are operating in an environment where we understand that the regime will actively use administrative resources in order to obstruct our work.”

Answering Tsikhanouskaya’s question about the security of personal data, Liber said that information about the “leak” of databases appears in the state press about once a quarter, but no one has seen these databases, and statements about this are not true.

“The “Golos” platform does not collect any personal data, so it is very difficult to deanonymize these people. A unique identifier on the platform is not a person, but a sent ballot, on the reverse side of which there are signatures of representatives of the election commission. It’s safe because it’s anonymous. We don’t have a single case that the data from the platform got somewhere,” Liber explained. He also said that non-attendance at the polling station is what the regime expects.

Pavel Marynich, a representative of the “Zubr” platform, said that now everyone can observe and report on violations to the Zubr platform. He announced the launch of the Civic Controller program, which will start on January 27, 2022. Anyone can become such a controller: a student, a worker, an employee and even a member of the election commission. All data will be collected securely and anonymously.

Marynich recalled that the perpetrators will be held criminally liable for falsifying the results of the referendum.

Alexander Dabravolski, the Adviser to Sviatlana Tsikhanouskaya, noted that since Belarusians are not given a choice in the case of the new Constitution, the united democratic forces propose to put two crosses in each column.

“Stability is where power changes, not rots. Stability is where honest elections are held and society calmly observes this, where there are no falsifications and the new government comes calmly,” Dabravolski said.

Share of non-performing assets has increased in Belarusian banks