Opinion. “Nick and Mike” on the degradation of the Academy of Sciences

The telegram channel “Nick and Mike” published a post about the degradation of the Academy of Sciences: who, how and for what reasons gets titles. Here are their words unchanged.

In the official and informal hierarchies of the scientific community of Belarus, the owners of academicians and corresponding members titles of the National Academy of Sciences have always occupied the highest position. Every professor who created his own scientific school dreamed of receiving the coveted title of a member of the academy. But since Soviet times, the scientific community has developed an opaque mechanism for determining who will be lucky.

It would seem that there are developed provisions on the election of members of the Academy, which clearly prescribe the criteria for participation in the competition of any scientist. But at the same time, the principle by which a competition for a particular specialty is opened in different departments is absolutely incomprehensible. With the formation of independent Belarusian science, the principle of opacity in the definition of new members of the Academy began to grow, as the criterion of loyalty to the current government was added to purely personal relations within the scientific community.

If earlier the opportunity to become a corresponding member mainly depended on connections with well-known scientists in the structures of the academy, who could apply for the opening of a competition for a certain specialty, now the key factor has become proximity to power.

But even with such a tough casting, there is always a danger of getting a wrong person into the ranks of the academy for whom the competition was created. And this is due to the simple fact that the competition is open and many people can participate. Quite often, at the opening of the competition for some specialties from all over Belarus, 5-10 people submit documents, each of whom is worthy of a new title.

Another problem for the leadership of the academy and the authorities is related to the voting procedure, which consists of two stages. At the first stage, only members of the section (for example, physical and mathematical, medical, biological, etc. sciences) should vote for the applicant, and then at the second stage – with the support of at least 2/3 of the members of the section – all members of the Academy vote at the general meeting. And here obstinate scientists can intervene in the implementation of plans, who will not appreciate the “real merits” of pseudoscientists and will vote against.

All these difficulties in turning persons close to the authorities into “great” scientists forced the leadership of the Academy to come up with a new, absolutely ingenious mechanism, which in some branches of science has become the main tool for cutting off the “wrong” candidates. It’s just that now the competition is announced not for a wide specialty such as, for example, algebra or surgery, but for an extremely narrow one, for example, if you exaggerate – surgery of the little finger of the left foot. Now, knowing the area of scientific interests of the candidate’s desired government, it is possible to automatically cut off everyone else from participating in the competition (this is equivalent to allowing persons of 1.95 hight, born in 1965 under the sign of Cancer to participate) in a political campaign.

Oddly enough, but these new rules of the game, invented by the leadership of the academy, do not cause indignation in the scientific community for two main reasons: the old members of the academy (elected in times of fair competition) can, as it seems to them, cut off pseudo-scientists by voting and do not want to lose their existing privileges, and the rest of the scientific community simply ceased to perceive membership in the academy as a real recognition of their achievements. And this is very sad, because the development of science is possible only in an environment of competition and fair recognition of merits.

The apotheosis of the disastrous policy for Belarusian science was the elections to the Academy of Sciences in 2021 in medical specialties. So in full members of the Academy (academicians) elections were held in 4 specialties: clinical microbiology, oncourology, regenerative surgery, organ transplantation. People who are informed about the composition of the medical sciences section will immediately tell you the names of all four corresponding members corresponding to the proposed specialties. That is, even before the elections, it was clear under which people the uncontested competition was created. Is it justice?

However, the election of corresponding members of the medical sciences section looks even more vile – here we are faced not only with a complete lack of scientific selection criteria, but also with a clear sign of corruption of the entire system. We all remember how, at the height of the political crisis in the autumn of 2020, the replacement of heads of state institutions began, who either expressed disagreement with election fraud and violence of the authorities, or did not actively participate in repressions against their employees.  It was at this time that the ‘ideologically right’ Sergei Petrovich Rubnikovich was appointed to the posts of rector of the Belarusian State Medical University and Igor Olegovich Stoma – of the Gomel State Medical University. And a year later, each of them received a truly royal gift – the opportunity to become a corresponding member. It would seem that both doctors of medical sciences have a sufficient number of scientific publications, what is the catch? 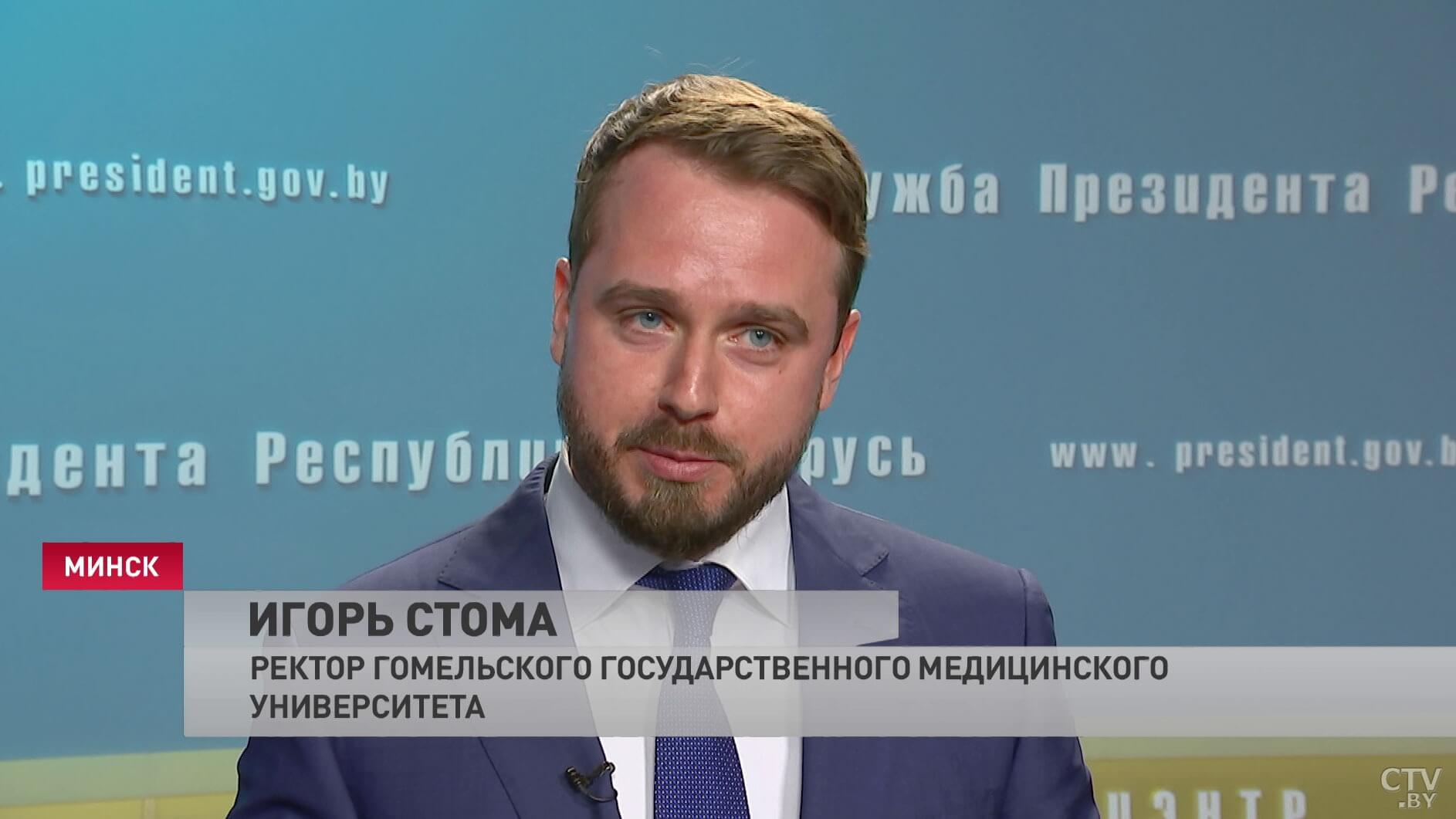 For Stoma, this is, first of all, age:he is only 33 years old, he became an associate professor in 2019, a rector in 2020 and now a corresponding member in 2021. A dizzying career, isn’t it? Most members of the Academy of Medical Sciences achieved such heights after 50 years, many at 60-70 years.

At first, there was hope that he would not be included in the list of candidates admitted to the elections in order to smooth out this unprecedented level of vanity and ambition. However, lobbying at all levels of decision-making did its job, and Stoma managed to become an uncontested candidate in the specialty of clinical microbiology. And although he was ultimately not elected as a corresponding member, the fact of such a candidate’s participation is a disgrace to the academy. 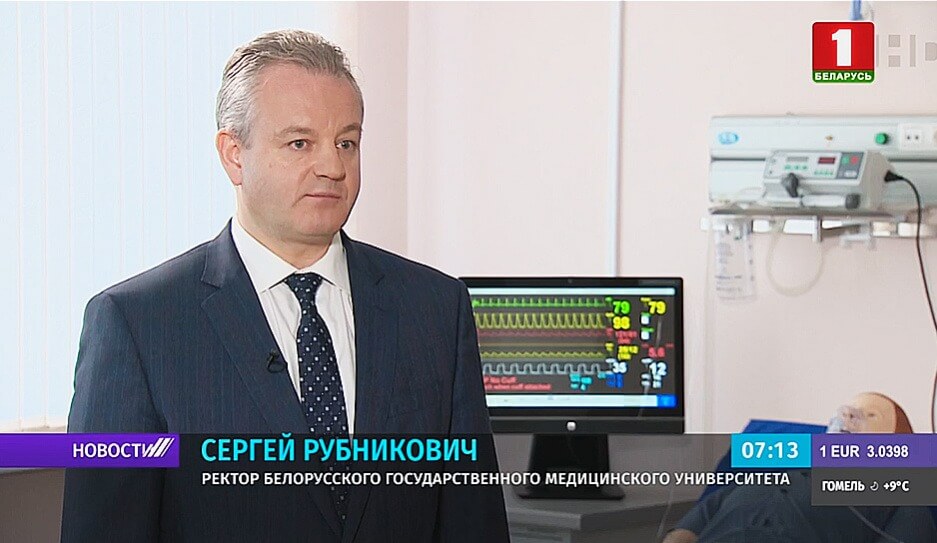 The second hero of our publication is Rubnikovich, the head of BSMU, who is included in the EU sanctions lists for mass expelling of students. Rubnikovich is the clearest example of a corrupt Belarusian official. A man, who at different times owned shares in several private medical centers and signed them over his close relatives, became the rector of the country’s leading medical university.

Rubnikovich is a dentist, and therefore the most correct way to become a corresponding member for him was possible only at the opening of a competition in the specialty “dentistry”. But under this option, the possible number of applicants for a single place would be calculated by at least 10 scientists, each of whom Rubnikovich would lose out on all criteria: the number and quality of scientific publications, the number of trained students, world recognition, etc.

It should also be noted that the only branch of medicine, and indeed of the entire science of the BSSR and independent Belarus, which was never represented in the Academy, was dentistry. Despite the huge percentage of specialists and scientific dentists with international recognition in the total number of doctors in the country, dentistry was demonstratively ignored by the leadership of the Academy and the Ministry of Health.

Since it was impossible to “give” Rubnikovich the title of corresponding member in the specialty “dentistry” due to a large competition, it was decided to come up with a vacancy in a very narrow specialty – cell technologies in dentistry.

But such a section of dentistry simply does not exist, it is not studied at the university, there are no dentists with such a specialization, there are no scientific laboratories and specialized journals with this name.

And there was only one person in our country who corresponded to the proposed vacancy and his name was Rubnikovich Sergei Petrovich. Unlike the situation with Stoma, Rubnikovich managed to become a corresponding member in the uncontested “elections”. Doctors and scientists of Belarus are ashamed of the members of the section of medical sciences, who, for reasons only they understand, temporarily forgot about their integrity and fairness in the voting. And after all, the corresponding members and academicians of the medical sciences section who voted secretly did not risk anything.

Dental specialists, who are well aware of the true level of scientific research in Belarus, talk about Rubnikovich’s huge PR of cell technologies and the complete absence of any real clinical results in this direction. Doctors are outraged by this decision, comparing the competition in this specialty with a spit in the face of the medical community of Belarus. As a result, the dentistry of Belarus received not a corresponding member in the specialty of cell technologies in dentistry, but simply – a “cell member”.

Elections to the Academy of Sciences of Belarus were originally supposed to be held on November 11, 2021, but were postponed without wide publicity to December 17. Aware of the mechanisms of falsification and corruption of the entire system, we were not optimistic about the victory of justice and fair scientific competition. However, realizing the inevitability of the collapse of the entire rotten system in the near future, we must make every effort to deprive falsified scientists of their titles after the complete victory of democracy in Belarus.

We would like to note that the medical scientists of Belarus have collected all the necessary material that will allow us, after the fall of the regime, to launch mechanisms for non-recognition of new pseudo-academicians and pseudo-members-correspondents. We call on all scientists to carefully analyze the results of the elections to the Academy in the relevant branches of science, fixing all illegal actions.

We must make sure that membership in the Academy of Sciences is the result of many years of scientific research, the publication of breakthrough articles, monographs and textbooks, the training of dozens of students, and not the availability of money, successful acquaintances, kinship or joint hunts and baths with those in power.

Opinion. Dzmitry Navosha: it will be much worse before it starts to get better

Opinion. Kharytonau on the meeting of the U.S. Helsinki Commission

Opinion. Artyom Shraibman on the telephone conversations of Borrell and Merkel with the official Minsk

Opinion. “Mythology of Belarus” on the expectations of the parties from the migration crisis