Hajun Project published a situation report on military activity on the territory of Belarus as of 07:00 March 17.

Columns of military equipment of the Russian Armed Forces with “V” marks continue to move across the territory of Belarus (here, here, and here). There is also movement of military equipment by railroad. For example, a train, which was transporting at least 18 units of equipment (Ural and MT-LB vehicles), was moving towards Rechitsa, Gomel Region.


12:00 (Minsk time)
A train with Russian military equipment is moving from Gomel towards Rechitsa. There are 18 Ural trucks and a MT-LB armored vehicle. pic.twitter.com/V3SepeIZhY


Equipment of the evacuation department of the medical service of the Russian Armed Forces was spotted today in Orsha (Vitebsk region).
Vehicles based on KamAZ trucks have “V” marks on them. pic.twitter.com/ZoKqzdQGtg

The greatest flight activity was recorded at military airfields in Baranavichy (13 aircraft; departures mainly in the evening: here, here and here) and Lida (20 aircraft; departures during the day: here and here). There was also insignificant activity at the airfields in Luninets (Brest region), Babruisk (Mogilev region), and the village of Vialiki Bokau (Mazyr District, Gomel region).

10:47 (Minsk time)
A missile launch from the Kalinkavichy district (Gomel region).
A possible location of the launch: pic.twitter.com/cG8TbfhZ4o

We also receive new reports on the use of civilian infrastructure in Belarus for the needs of the Russian Armed Forces. For example, Russian personnel is accommodated in the dormitory of the professional college in Mazyr (Gomel region), located on Katouskaha street, 48.

Separate units of the Armed Forces of Belarus continue to move. Thus, several convoys of vehicles were recorded moving (here, here, and here). Also, a train carrying equipment of the Belarusian Armed Forces was seen in the morning, entering Zhlobin (Gomel region). T-72 tanks, BMP (infantry fighting vehicles), and self-propelled howitzer 2S1 could be seen on the platforms.

07:50 (Minsk time)
A train with military equipment from Rahachou arrived in Zhlobin (Gomel region).
There were fresh images of the Belarusian flag on the last 5-7 tanks.

Special attention should be paid to the situation in the city of Brest. In the morning of March 16, we received information that incessant firing and volleys could be heard at the “Brestski” training ground. As it became known later, planned training drills of the Belarusian Armed Forces were being held at the training ground. 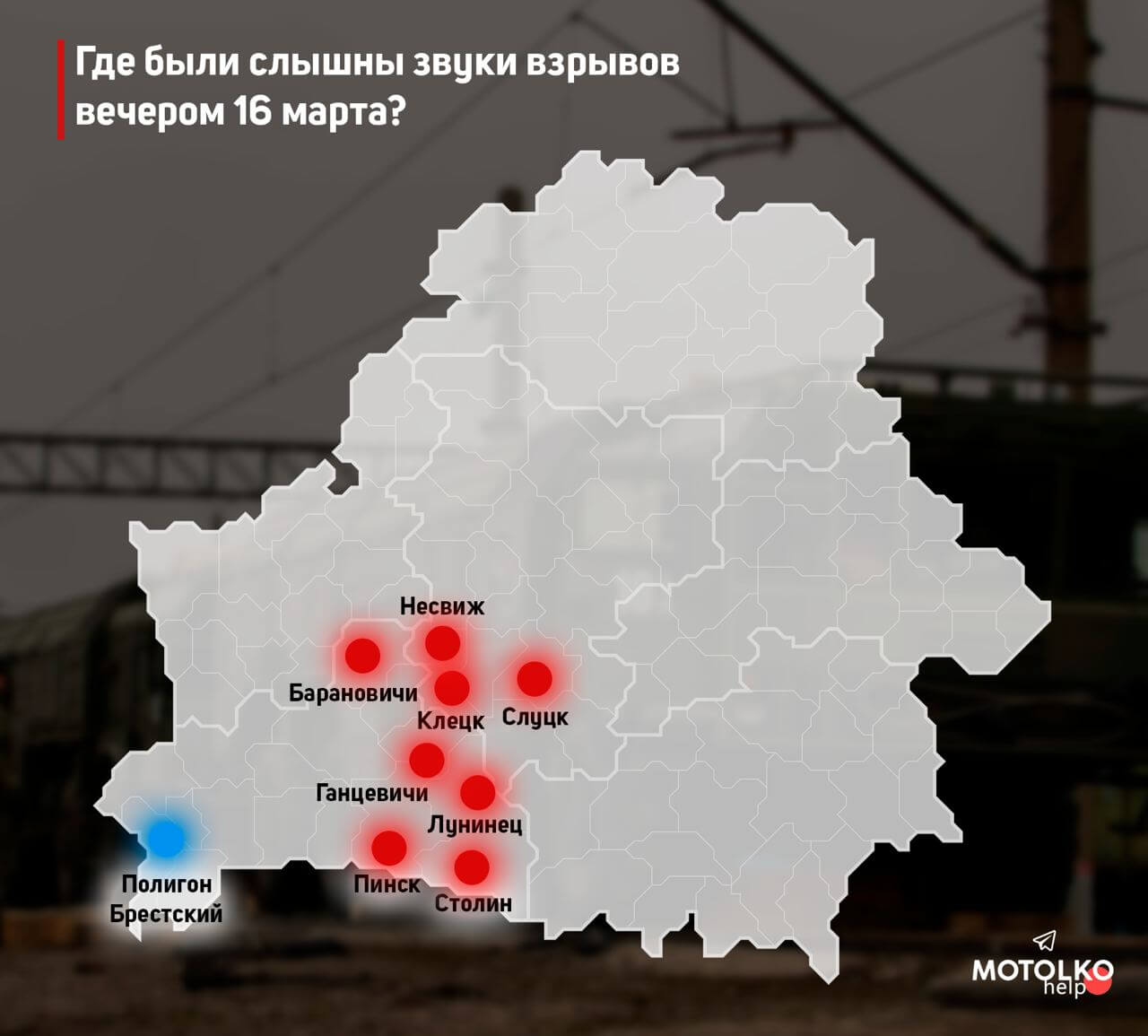 Locations of the reports on possible explosions, March 16 / motolko.help

Also in the evening of March 16 (after 23:00) there were reports on explosions. They were heard by residents of Baranavichy, Stolin, Pinsk, Hantsavichy, Slutsk, Niasvizh and Kletsk. Pro-governmental telegram channels explained that the explosions were heard because of the drills at the “Brestski” training ground. However, the distance from the training ground to the nearest town, where the explosions were heard (Pinsk), is 165 km. The sound of artillery fire does not spread on such a distance.

We continue to monitor the situation.

Prosecutor General’s Office: there were no acquittals in “extremist” cases

Migrants at the Belarusian-Polish border. Thursday

Lukashenka: Military doctors will go to Syria if they want to