A video is shared over Telegram channels, in which Nikolai Bredelev, the head of public relations department of A1 company, says he’s homosexual and has been living with a man for 7 years, tells the amount of his salary, and also claims to have been sending corporate information to journalists. He also says that he and Anton Motolko have been acquainted for more than 7 years.

“Since July 2020, I’ve been providing Anton Motolko the information connected to my professional activities. I’m also subscribed to extremist telegram channels like Motolko.Help, Nick and Mike. I’m detained by police officers at the moment”.

This is not the first video of this type. It’s a common practice among police officers to beat and torture the detainees to get the information and ‘picture’ for the video needed, to share the videos later via Telegram channels and sometimes on state TV channels.
The testimony is always beaten out of detainees, they’re abused both physically and psychologically.

This video has provoked an extreme reaction among Lukashenko’s propagandists, which lead to various posts in Telegram channels, sometimes even using obscene language.

For example, this is how Grigory Azaronak, a propagandist and host of the STV TV channel, expressed his emotions about this case in his Telegram channel:

“Faggot. Not just a faggot, but a motherfucking faggot.
A piece of shit on your screen is the press-secretary of A1. It has been living with a man for 7 years already. It fully keeps its lover (the salary is 4500 BYN). The house is furnished like that of the bourgeois in the worst Soviet novels. A complete closet of toys for fornication. That is, two guy parts were not enough for them, they needed the third. But GUBOP would not have come to him for all this. These are his sins, his vices, but there is no guilt to society.

But for being friends with Antonina Gadimovna Sandalina [the propagandist means Anton Motolko- ed.], for leaks of corporate information to this scum – you can go [to prison] for a very long time. And then there are no options. This pomegranate juice lover has been leaking private information since July 2020, since the departure of the filthy extremist.

And here are the questions to A1. Did you really not know what your character, being in such a position, did? You didn’t know his views? Didn’t know that private information about customers gets into the Lithuanian residency? Faggot. Not just a faggot, but a motherfucking faggot”.

Screenshot from the Telegram channel of Grigory Azaronak

Azaronak quoted a pro-regime TV channel BT, saying that the head of public relations department was a member of an extremist formation, and Velcom (the former name of A1 company) supported protesters. For example, by “drawing stickers”.

“Do we not remember how the management approved the “strike” of its employees on 26.10? Don’t remember how they painted stickers for zmagars? And how they sheltered judas like Martynenka? Then they went quiet, but they still have so many “cultural programs” for the zmagars. And again. Management couldn’ not know what the spokesperson was doing. And according to the up-to-date information, he was, let’s say, an ass-member of an extremist group. There are a lot of questions. The answer may be in one word – Velcom”.

Screenshot from the Telegram channel of Grigory Azaronak

“Just imagine what is happening now in some offices of the A1 company after the detention of the swung-both-ways press secretary Nikolai Bredelev. Shredders boil, zmagars break fingers, cleaning up messages in cozy chats in panic. But it’s too late to sing Bon Jovi when the song has changed, all the white-red-white and other “spicy” videos has already got into the clutches of the GUBOPiK!

An old faggot Bredelev turned out to be a fierce mother******, who leaked user data to an extremist Motolko! Let’s remember, what distinguished A1 on the protest wave of 2020? At least, zmagars’ stickers and encouragement of the “incredible” strike on October 26, selective blocking of Internet during protests, compensation for the “inconvenience” of the rebellious August with interruptions in the work of the Internet.

Finally, the same sandal Motolko recommended zmagars to migrate to A1 tariffs, closer to the faggot city! The question for the company is, how did it happen that a zmagar trash was a press secretary until GUBOP knocked on the door!” 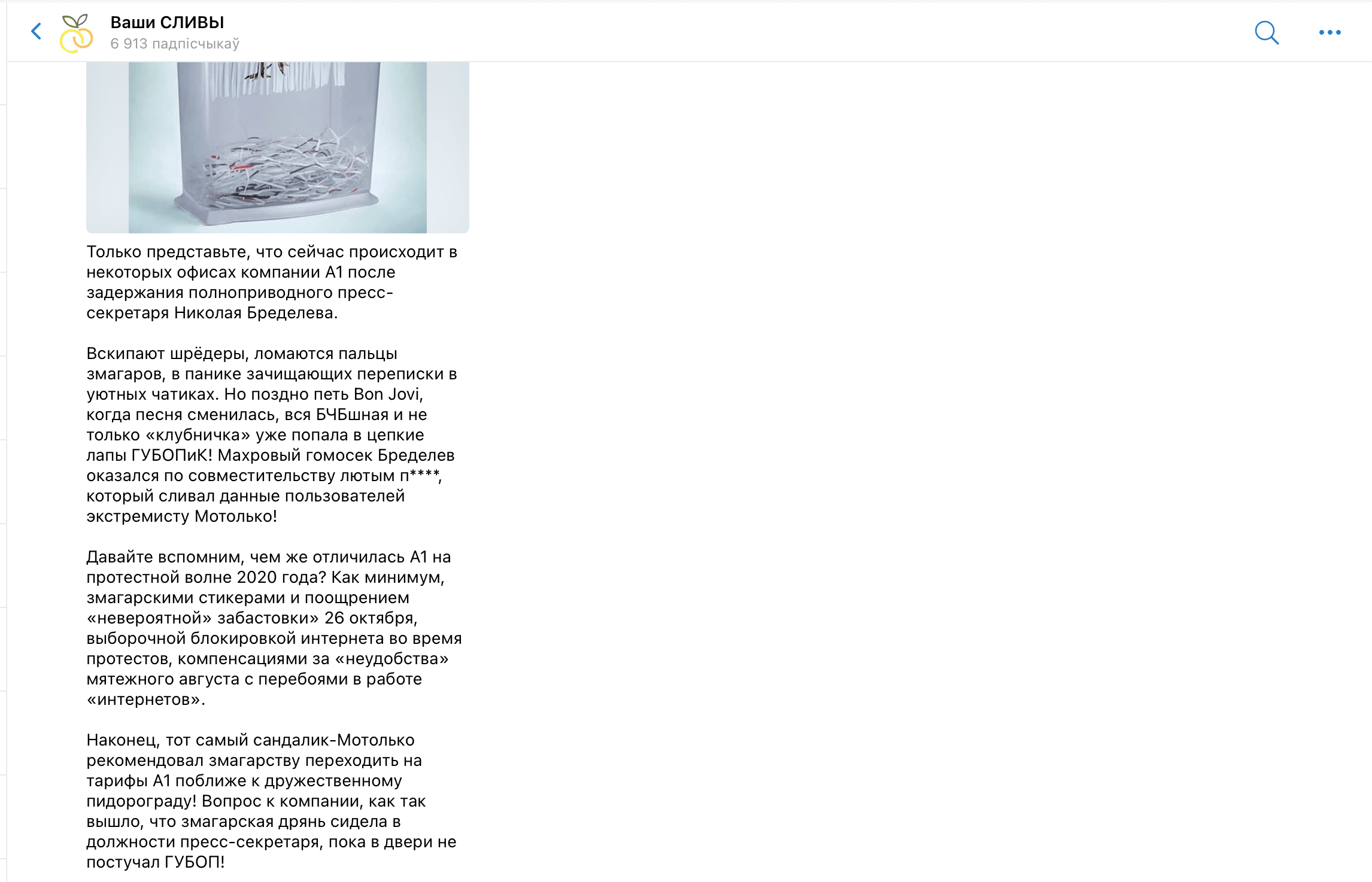 “Zheltiye Slivy”, one of the main pro-regime telegram channels, which is controlled directly by the Office of the President, called A1 a “terrorist” company, and blamed it for supporting protesters by leaking private information.

“A1 is a TERRORIST COMPANY!

Ah, Velcom was rebranded in vain a couple of years ago! Today, their press secretary was given such a wonderful “welcome” in the pre-trial detention center by specialists from the GUBOPiK that it’s nice to see it. The A1 team now has a black hole. Literally and figuratively. But we are confused by at least a few things about the Bredelev’s case. So.

All the opposition trash were so upset about the detention that it immediately became clear that the guy was an important element in terms of information warfare. He generously leaked personal data to opponents of the “bloody regime”. Now it’s like they’ve lost their radar and are very sad about it. And only Motolko doesn’t worry – he is silent, like all he can do is clam up.

A spokesperson in any company is a big dog, and especially  in the office of a mobile operator, but it is unlikely that he had unlimited access to customer databases in the company. It’s above his pay grade. Moreover, the Austrian company has a very serious system that clearly records who has connected to it, what data they were interested in, what requests were answered. At least, this means that Bredelev used the system with the permission of the leadership, and even with its blessing.

Judging by the previous actions of the A1 leadership, they clearly did not sympathize with the current government and would be happy to participate in the protests at least in this way – helping opponents of the regime with information. Although there are plenty of other zmagars sins behind them. So the dialogues of the GUBOPiK with the detainee can lead to the most unexpected results. Maybe someone from the top A1 will also be detained at the airport tonight.

And in general, leaking data to an extremist Motolko is not a vanilla bun with poppy seeds, it is an accomplice to a terrorist. And, therefore, the responsibility for this is very serious, five years in a strict regime prison colony. Sandal has a new “godson”.

Well, while law enforcement officers are figuring out who there in A1 is the main scum, you, Belarusians, should not wait, you should terminate the contract, change your operator to another, since personal data is so easily leaked there”. 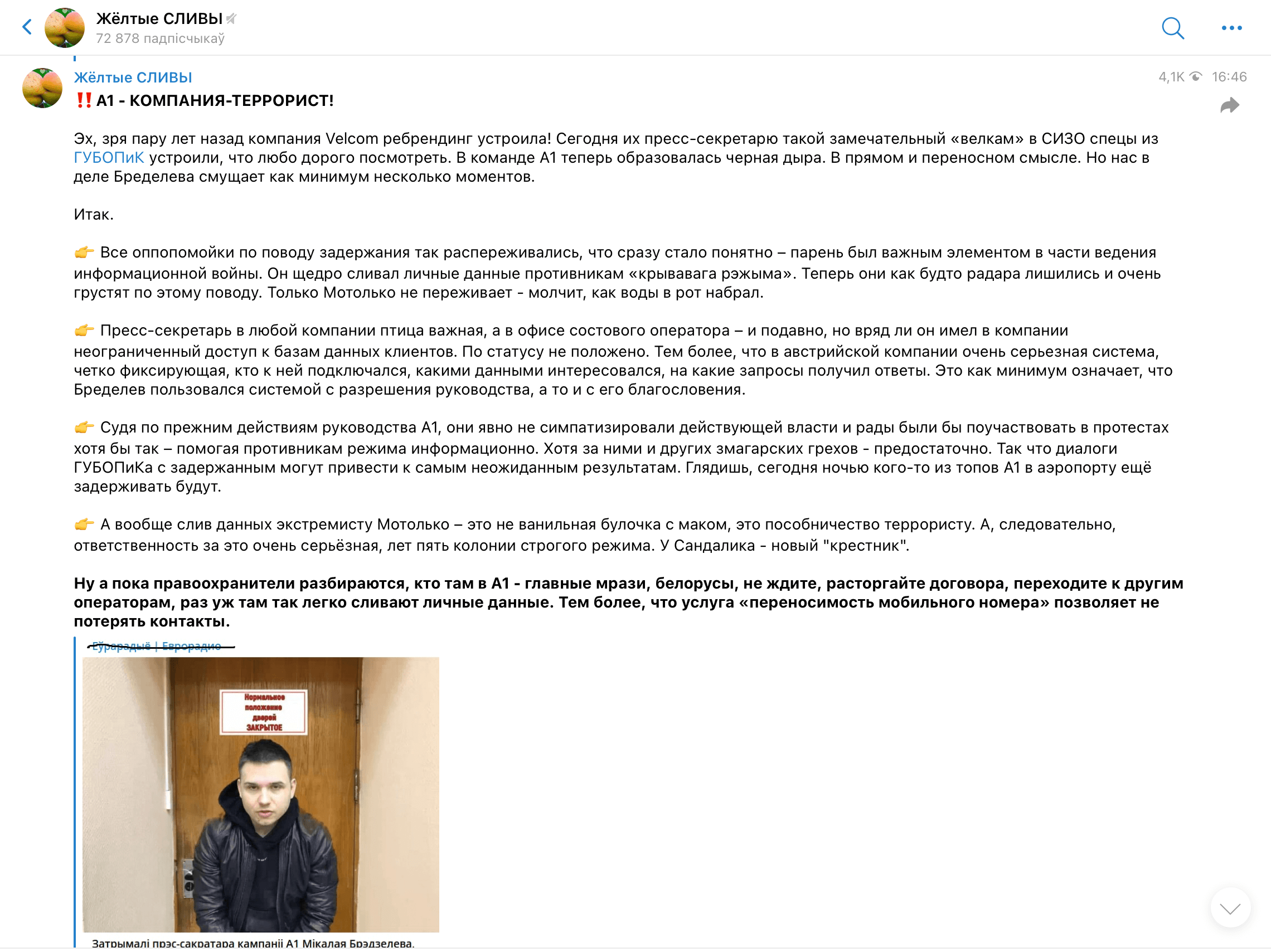 The pro-governmental telegram channel hasn’t stopped on this, and continues to publish posts where its authors propose to punish the company “as harsh and painful as possible”. They also blame A1 company for terrorizing Belarusians and financing protesters.

“A1 – confiscate can’t kiss the ass anymore. Place the words in the right order as you see fit.
Let’s just cut to the point: Zheltiye slivy propose to nationalize A1. No, not that: CONFISCATE. Confiscate from an organized criminal group. By court, of course, without appeal. It’s a gang, and it should be fairly punished for its crime.

And sanctions, you know. Where was Austria’s veto when criminal sanctions were imposed on us? So, you are going to continue to rob Belarusians, but when it comes to protecting them from looters – you hide in the bushes? No way.

Moreover, A1 does not hide in the bushes, but actively supports the coup. It feeds enemy resources with advertising, finances zmagar dancing, and keeps terrorist accomplices in the staffing. Moreover, they approve them of the terror against Belarusians!!!

The company’s bosses, with the help of their flunky faggot, declared a terrorist war, leaking people’s personal data to scum and bastards. And what do we have with the new legislation on the protection of personal data? That’s it.

Anyway. This shitty import company got caught up and has been in a serious heap of that. And it must be punished. As harsh and painful as possible. Total scums”.

“Beaten during arrest and waken up at night”: Prison conditions in Mogilev temporary detention center 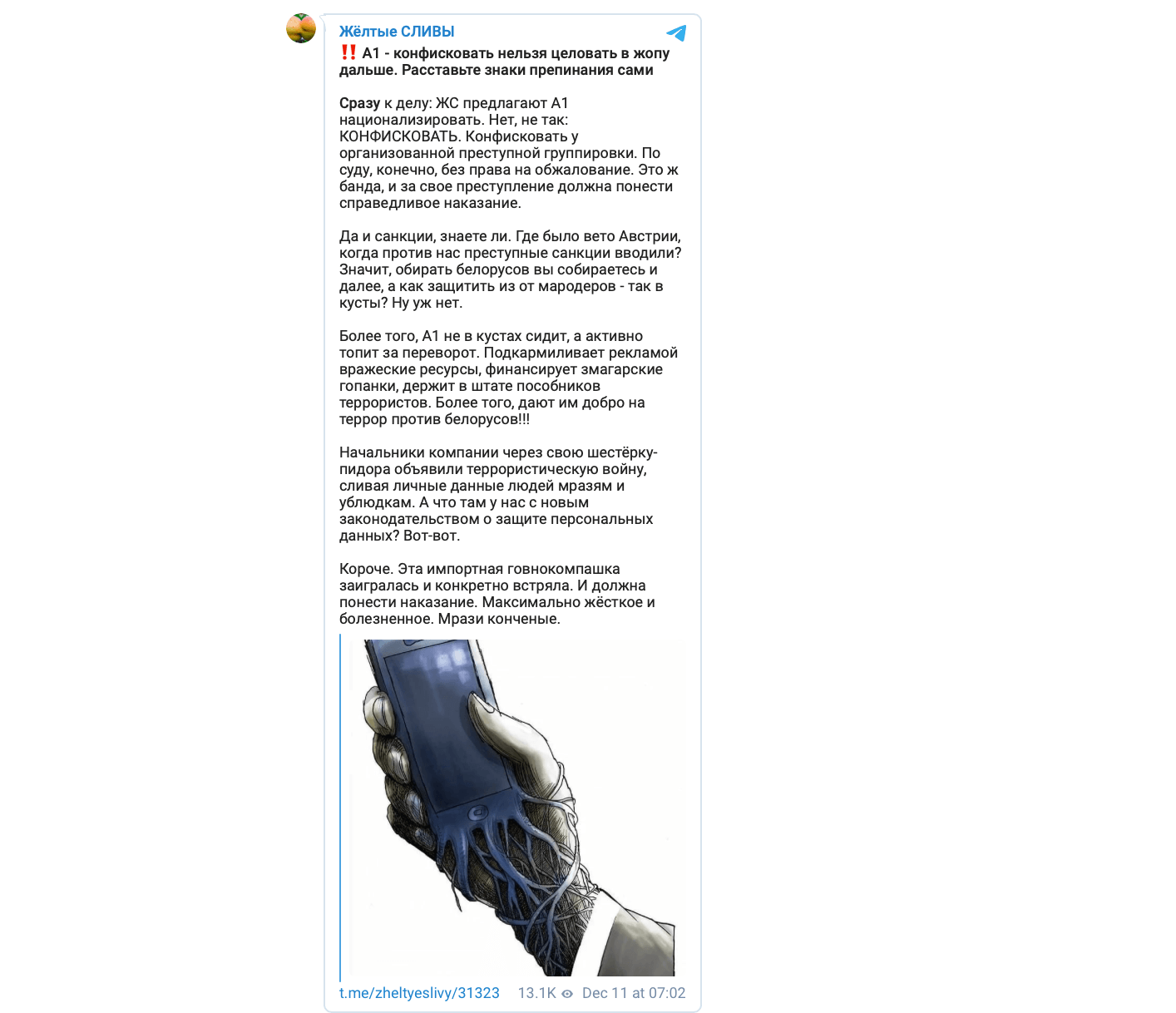 Minus 120 million: 2/3 of all funds were withdrawn from Absolutbank in six months

Did Viktor Lukashenko come to Qatar on Medvedchuk’s former plane?