The editors of motolko.help got a document on amendments to the internal labor regulations of the Minsk National Airport signed by Vyacheslav Khoroneko, the General Director of the airport. It is said that the changes are introduced to maintain a high level of aviation security, flight safety, as well as information protection of the enterprise. At the same time, the changes referred to in the document have nothing to do with flight safety. 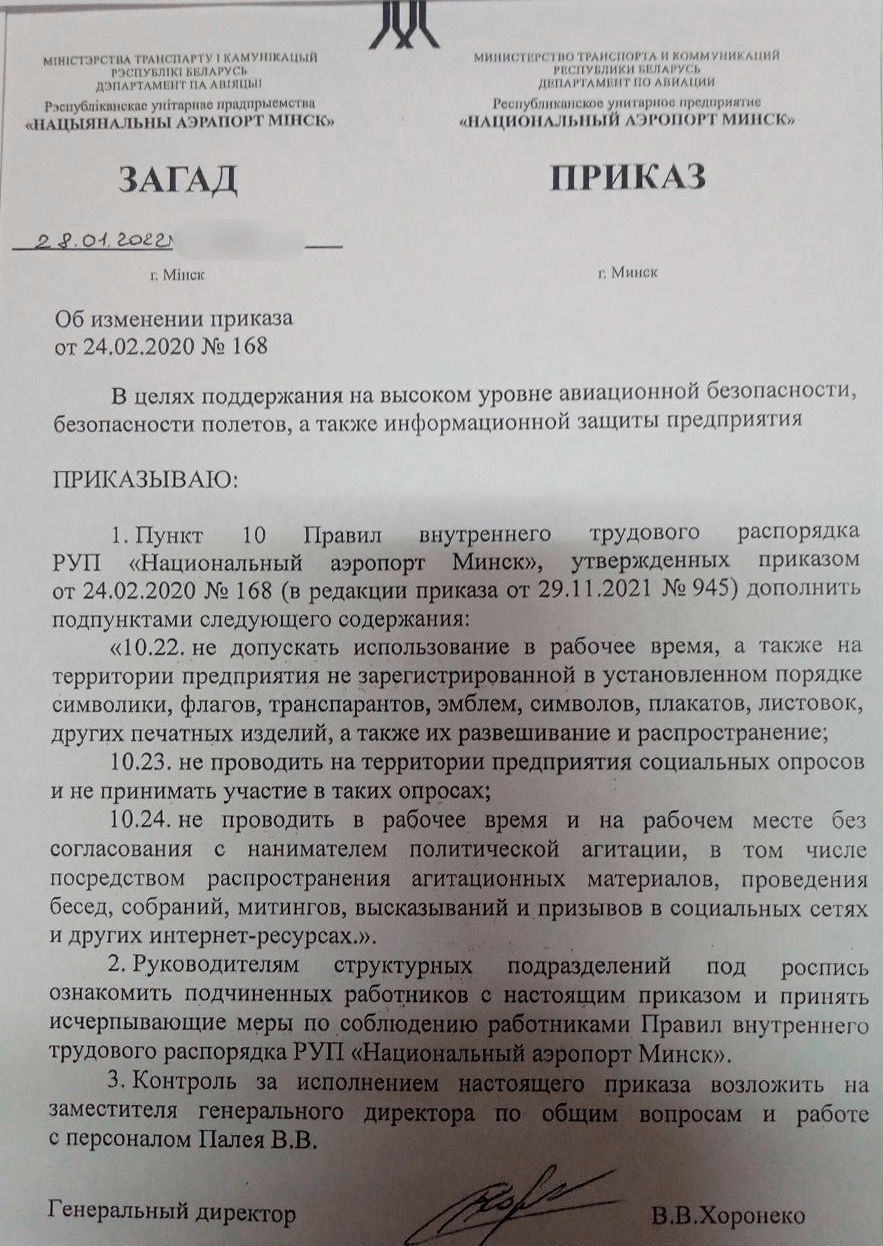 The order on amendments to the Internal Labor Regulations of the Minsk National Airport / motolko.help

The document says that employees of the Minsk National Airport are now prohibited:

According to experts of the Belarusian Helsinki Committee, RUE Minsk National Airport violates the right to freedom of expression by its order (people are prohibited from using symbols, emblems, etc., conducting and participating in opinion polls). The right to privacy is also violated (it is obvious from paragraph 10.22 that we are talking not only about working hours, but also about all actions on the territory of the enterprise: conditionally, you go on a lunch break to drink tea in an airport cafe, take out a wallet with “Pahonya” – violate the rules).

Obviously, the measures to be taken do not correlate in any way with the stated reason (the title of the document is “In order to maintain a high level of aviation security, flight safety and information protection of the enterprise”). What is the connection between the emblem and aviation security?

In order to hold employees accountable for committing non-work-related activities during working hours and in the workplace, the current labor legislation is sufficient. At the same time, in any case, disciplinary proceedings (even if there are valid grounds for this) cannot violate either freedom of expression or the right to privacy.

In addition, the experts note that there are two more aspects that are worth paying attention to.

First. What is happening is an example of how the state uses business to put pressure on a person. It’s our model of life. Business is created in order to make money everywhere, but here it is also an instrument of participation in politics. The dependence of business on the state and the dependence of the employee on the employer are used in full. Let us recall that the possibility of participation of labor collectives in the electoral process is fixed at the level of the law!

Second. Regardless of whose initiative the National Airport issues such an order (on its own or at the behest of the top), the company thereby violates the civil and political human rights of its employees.

Business and human rights are standards that govern the relationship between business and a person (employee, customer, local communities) that arise directly during the production cycle or other process of making a profit.

Today, assessing and preventing the risks of human rights violations in commercial activities is a global trend, a standard and a legal framework for doing business in developed jurisdictions. The standard is based on the Guiding Principles on Business and Human Rights, adopted by the UN in 2011, their provisions are implemented in the policies of many international industry associations, international companies, standards of international financial institutions (World Bank, IFC, EBRD). A number of EU member states (France, Norway, Germany, etc.) have already adopted national laws requiring companies to monitor human rights violations in their supply chains, including in relations with non-resident companies. The EU directive on human rights due diligence is being prepared and will soon be adopted, which will also apply to relations with non-EU companies. A human rights component is contained in business ethics standards, ESG and sustainable development principles, the UN Global Compact, quality standards (ISO) and reporting standards (IFRS, GRI).

Media: Dzmitry Papou, convicted in the "Tsikhanouski's case", went on a hunger strike

Minus 120 million: 2/3 of all funds were withdrawn from Absolutbank in six months