“Nashy Groshy”: the national debt has grown. How does it relate to dollar keeping?

The telegram-channel “Nashy Groshy” published a post in which it clearly shows the connection between the growth of public debt and the dollar rate. We publish the article unchanged.

The National Bank and the Ministry of Finance published information on public debt for the beginning of December 2021. It shows that for a month, from November to December, it grew significantly – from 55,3 to 58,3 billion rubles. What could be the reason for this? To understand this, let’s take a closer look at what happened to the country’s internal and external debt. 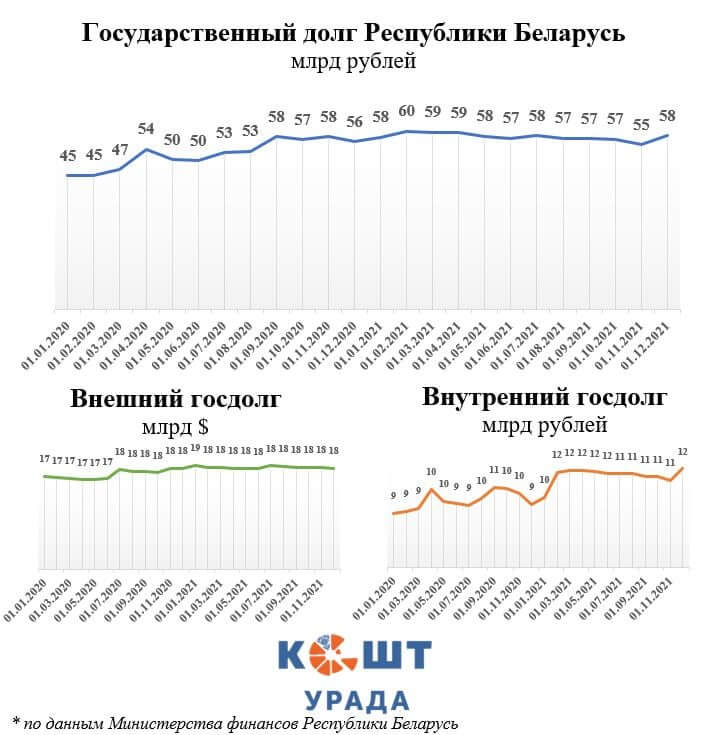 So, we can see that the external public debt not only did not grow, but even decreased by $90 million to $18.2 billion. The internal national debt grew by 814 million rubles. Now it is the main source of possible borrowings for the state. But where is the remaining difference? Most likely, a significant increase in public debt can be largely explained by the growth of the foreign exchange rate. The value of the US dollar and the euro rose in December, and since the bulk of public debt is expressed in these currencies, its equivalent in Belarusian rubles has increased significantly.

Here we want to focus your attention on the scale of the impending problems in the event of high inflation. Today, the state public debt is so dependent on exchange rates that even the dollar, which grew over the month from 2,42 (November 1 at the rate of the National Bank) to 2,55 (November 30), turns into significant changes in the level of debt.

The national debt is 58 billion rubles in equivalent now. More than 97% of it is formed in foreign currency. Understanding this fully explains why the national bank is so insistent on holding on to a stable exchange rate of the national currency. And at the same time, the consequences of a more or less serious devaluation of the Belarusian ruble are becoming apparent.

But, unfortunately, it is becoming increasingly expensive to heal the economy with a soft devaluation, since at the same time the size of the national debt and the cost of its maintenance are growing more and more noticeably. By helping businesses with exports, the government will sink the economy as a whole. The “economic miracle”, built on the cycle of directive loans with their gradual hanging on the budget, takes away more and more space for maneuver from the Belarusian economy, leaving, in fact, no choice. We have to live in debt: payments are growing, and in order to repay them, we need to borrow even more.

The prospects for such a 'carousel' are looming more and more clearly – sooner or later the national debt will become unbearable. Unfortunately, there are fewer and fewer assumptions at the government level as to how this can be avoided.

A lot has been said about structural reforms of the economy. Not all of them were implemented (frankly speaking, most of them did not even begin to be implemented). But several years until 2020, positive steps were visible: the government and the national bank tried to restore confidence in the national currency, reduced the dollar component in the economy of the country, were close to issuing bonds denominated in Belarusian rubles, sought to diversify sales markets.

All these efforts have borne fruit, but now they are in the past. Variability is narrowing, any hopes for cooperation with the European Union, the United States, international financial institutions are becoming more and more illusory in the current situation in the country. There remains only one uncontested vector – the Russian one. This means that the economic policy of Belarus will be increasingly “managed” from the neighboring country.

Speaking about the national debt, it is also worth remembering about the debts of state-owned enterprises, which are guaranteed by the government. This is a lot of money in the figure of 58 billion rubles that is not taken into account. Here we are talking about the amount of about 9 billion rubles. If the negative scenario for the Belarusian economy is realized this year, the public debt together with state guarantees may increase to 61% of GDP compared to the level of 46% of GDP predicted in the baseline scenario.

Comparing with Belarus and supporting aggression. How pro-governmental telegram-channels cover events in Kazakhstan

Shootout on Yakubovskogo: KGB officer and resident of the house were killed

“The real statistics are ten times higher”. Belarusian doctors about the 4th wave of COVID-19