The telegram channel “Nashy Groshy” published a post in which its authors analyze how the number of individual entrepreneurs, small and micro organizations has changed over the year. And most importantly, what is the result of endless inspections of private business and changes in the taxation system, in monetary terms. We publish the post without changes.

Today we will talk about what is happening in the country with private initiative, and how these changes will directly affect our lives in the near future. This is a story about the Sharikovs, who decided to equalize everyone. At the same time, the main benchmark to which they aspire is poverty. Why did we come to these conclusions? Recently, data on what happened to private initiative in the country in 2021 were made public, among them the number of entrepreneurs, small and micro organizations. A few months ago, we wrote that business in Belarus is closing and getting smaller, and the latest statistics not only confirmed the fears, but also aggravates the prediction. 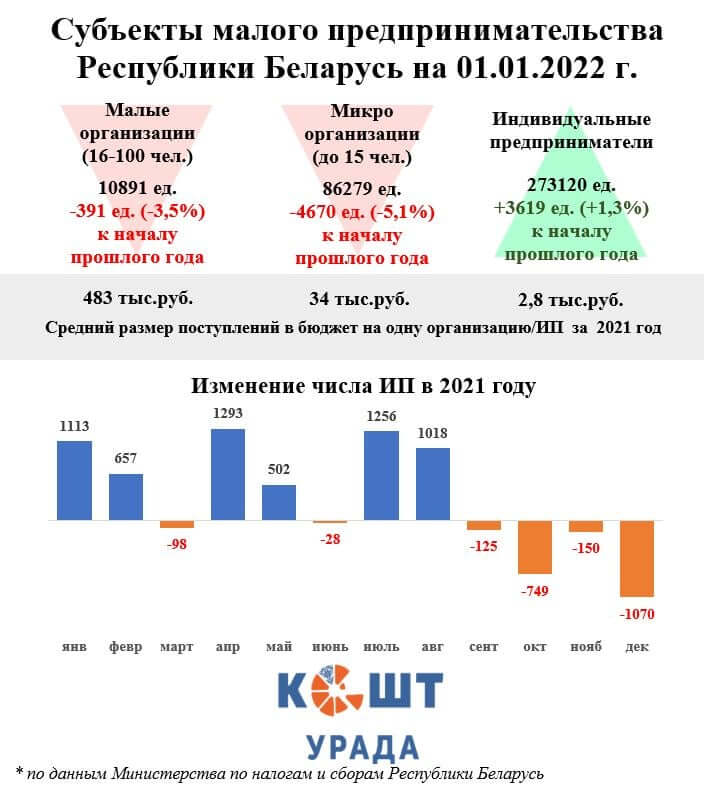 Small business entities of Belarus as of January 1, 2022 / Nashy Groshy

In total, small businesses in the country decreased by almost fifteen hundred units last year. This fact in itself causes concern, but if you look at the changes that have occurred in detail, it becomes clear that everything is much sadder than it looks at first glance.

There were 391 small organizations less in the country (each of which employed from 16 to 100 people), the number of micro-organizations (they can employ up to 15 people) decreased by 4670. But on the other hand, 3619 units arrived in the regiment of individual entrepreneurs.

What do these numbers mean?

First, it is worth paying attention to the only positive news – an increase in the number of individual entrepreneurs. In fact, if you look at the dynamics of last year, it becomes clear that there is absolutely nothing to rejoice about. It was still possible to observe a clearly traceable “pulse” until August, as a result of which registered entrepreneurs significantly exceeded the number of those who completed their activities. But since September, a continuous “minus” begins, and on an increasing basis (in December, for example, it decreased by 1070 individual entrepreneurs). The pulse stopped. And the reasons are obvious – these are the government’s efforts to change taxation.

And now we come to the most interesting thing. Obviously, by the nightmare of private business inspections, changing the taxation system, the state pursued a specific goal – to withdraw as much money as possible from business. Did he succeed? Based on the statistics on the chart, we can calculate the approximate price of “reforms” at the moment.

Business unions are not unreasonably afraid that, not being able to legally conduct their own business, but possessing entrepreneurial talents, people will either start working in clandestinely or leave the country. And that’s happening today. After all, the main resource of an entrepreneur is himself. Having earned in Belarus, he will certainly be able to prove himself in another country.

2022 will be decisive for the Belarusian economy. It will become clear whether the numerous negative predictions will be justified. We will understand that they have been justified, even by indirect signs, for example, by abrupt changes in the populist rhetoric of the authorities: fewer and fewer far-fetched stories about “successes” and “breakthroughs” will be heard, and more and more often we will hear excuses for failures, which can no longer be hidden.

This is not even a story about Sharikov, who was just an enterprising fool who wanted to “strangle cats”. Everything is much worse, the Belarusian Sharikov seeks to kick Professor Preobrazhensky out of the apartment, without thinking that there will be no one to treat him.

Opinion. "Nick and Mike" on the degradation of the Academy of Sciences

Opinion. Serge Kharytonau on the "referendum" as imitation of a democratic procedure

Opinion. Alexander Shlyk on the Referendum

Opinion. “Belarusian order” on discussion in society after the words of Klinov and Kravtsov

“Repeating the sanctions story in Russia”: Economy expert on how the embargo will affect Belarusians