The telegram channel “Nashy Groshy” has published a post in which it examines the structure of expenditures of the budget of the Union state for 2021. We publish the post unchanged.

A lot of copies have been breaking around the concept of the Union State lately. Of course, first of all, this is a political project, but, like everything political, it has a completely understandable economic basis that can be calculated.

The Union State has a budget that is being successfully mastered. In 2021, it amounted to 160.9 million Belarusian rubles. The revenues of this budget are annual contributions from Belarus (35%) and Russia (65%).

Where does the money go? In fact, this is a very important indicator reflecting the priorities set by the two countries. If you have a lot of time, you can read a large article in the December edition of the journal of the Ministry of Finance about the specifics of the distribution of funds in the Union State, which describes in detail where the Union money goes. We will save your time and pay attention only to an important quote in this publication: “Most of the projects are implemented in strategically important knowledge-intensive and high-tech industries”.

Sounds solid! Let’s try to figure out what kind of industries these are, especially since the information is in the public domain. 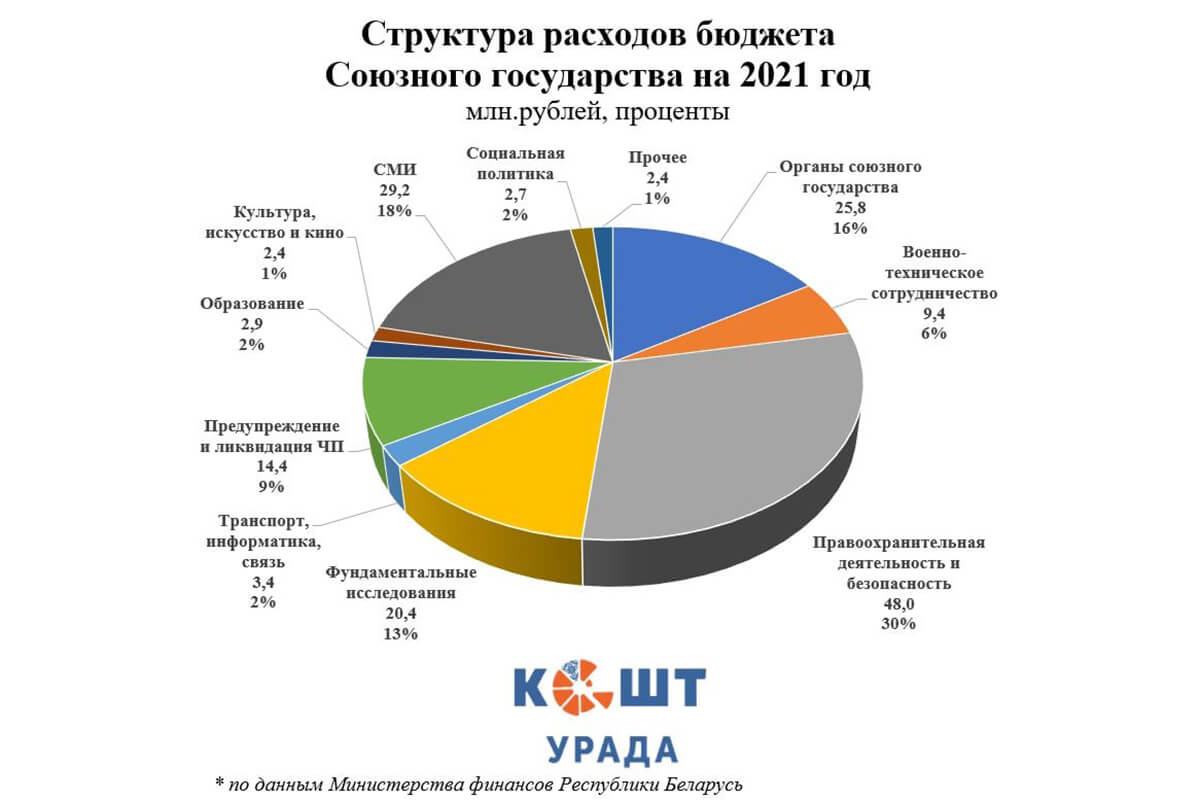 If you look at the distribution of expenditures of the Union budget in 2021, you will be surprised to see that the most knowledge-intensive and high-tech industries were “law enforcement and security”, which is allocated 48 million rubles (about 30% of the total amount) and media – 29.2 million rubles or 18% of the total budget.

By simple calculations, we can conclude that 70% of the budget goes to the army, officials, police and pro-government media.

Moreover, if we look at the data in dynamics, we can see how priorities have changed. For example, law enforcement in 2017 “ate” only 7% of the Union budget, military-technical cooperation – 0.5%, money spent on officials were 13%. But earlier, about 20% of the budget was invested in industry – today it has completely disappeared from the items of expenditure. Culture in its best years could claim 4%.

Here you can see the real priorities of cooperation between the two peaceful states “for the people”. No one hides them.

"Nashy Groshy": sinking into the debt swamp. Why officials are afraid to look ahead a year or two today

Unsubscribe time. What is happening with popular telegram-channels in Belarus

“The real statistics are ten times higher”. Belarusian doctors about the 4th wave of COVID-19

The Kremlin and Belarusian propaganda write that Raman Pratasevich fought in Donbass. We explain why this is a lie