“Nashy Groshy”: sinking into the debt swamp. Why officials are afraid to look ahead a year or two today

The telegram channel “Nashy Groshy” has published a post in which its authors write about the national debt and how to solve the issue you will have to choose between several very bad options. We publish the post unchanged.

Public debt for Belarus is becoming an increasingly significant problem every day. At the same time, the policy of working with this debt is coming to two very simple formulas. The first is “We should stand for a day, and hold out for a night”. The second is “Après moi, le déluge” [Ruin, if you like, when we are dead and gone- ed.].

Everyone, including even high-ranking officials, already recognizes the fact that the country is close to a debt trap, and maybe is already in it. The country has a lot of loans to pay for, they are expensive, and in the end this is the money that is withdrawn from our economy, not invested in development. This inhibits the already weak growth.

As the debt burden in Belarus increases, opportunities for investment in fixed assets decrease, this leads to an increase in their depreciation. In the end, we will not be able to produce high-quality products, as we do not have the financial resources to upgrade the equipment. And another modernization according to the old patterns will not solve the problem. The effect of the past was highly questionable.

Instead of being resolved, the debt issue is postponed, and the resulting gaps are plugged by new borrowings that make already burdensome debt increasingly dangerous for the economy. What do officials do in this situation? Judging by the decisions they make, they just try not to think about what will happen tomorrow. 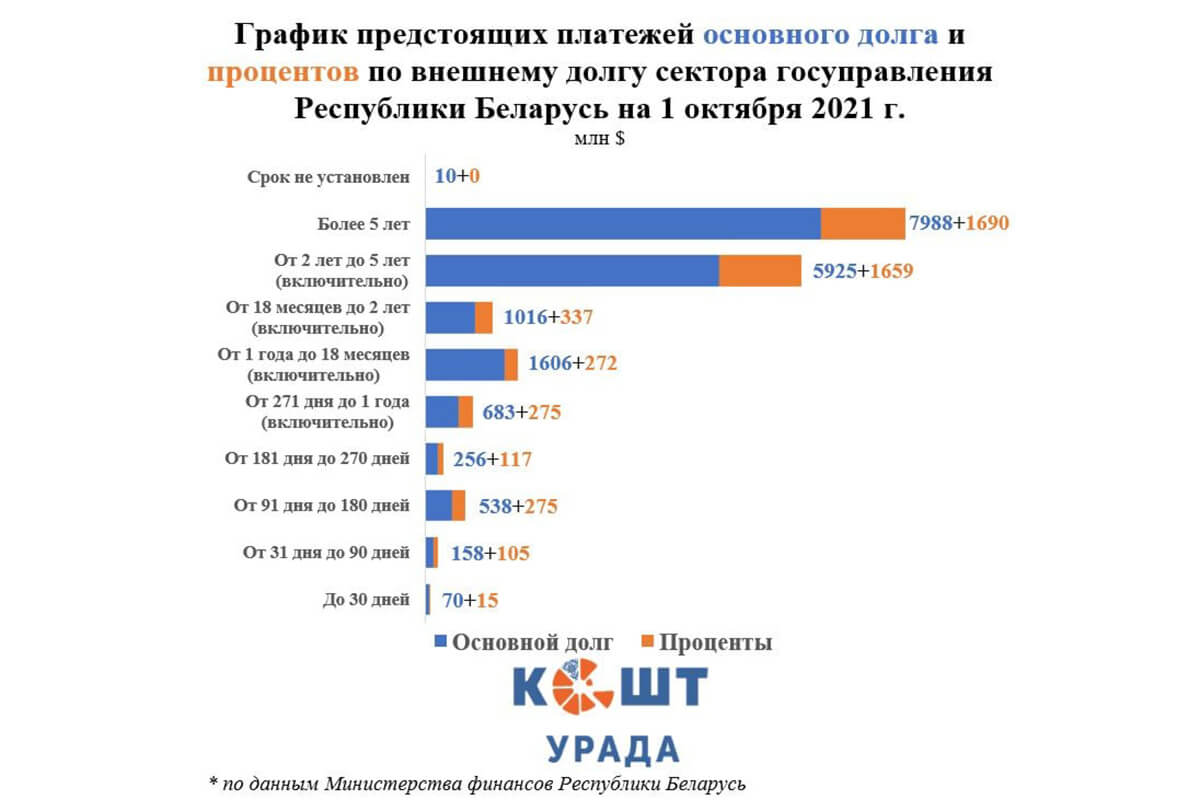 Next year, the country will have to pay 10 billion rubles or about $4 billion on public debts. Even the Minister of Finance notes that this is 2 billion more than in 2021. But this is just the beginning of the difficulties that await us. This year was marked by an “export miracle”, which is gradually going down, and sanctions, which have not yet begun to work in full force. And what happens next?

In 2022, obviously, several negative factors will converge at once. The emerging fall in exports will be exacerbated with sanctions. And in these conditions, it will be necessary to repay the loans received earlier in a much more amount!

Printing money to pay off debts will not work, because the government took loans in foreign currency. Expenditures of the republican budget for the next year are 30 billion rubles (the budget is formed with a deficit of 3 billion). For comparison, the amount equivalent to a third of the republican budget will be spent on payments on the national debt (in practice, only interest on loans is paid from the budget, in 2022 it is 3,5 billion).

If you look into 2023 and later, it becomes clear that it will only get worse. This is reminiscent of the painting “The Ninth Wave”, when behind one terrible wave we are covered with even larger one. For example, in 2023, Belarus will need to pay even more – about $4.7 billion.

Belarusians will have to give an increasing share of what they earn in order to repay the loans that the government has accumulated. Without changes, the process will continue to loop according to the formula “take a loan to repay another loan”.

As a result, it turns out that one of the main financial concerns of the government in the coming years is the work on permanent refinancing of debts. At the same time, opportunities to find funds somewhere else, except in Russia, are unlikely to ever happen.

But we have not yet mentioned the debts that state-owned enterprises have accumulated under state guarantees. With the deterioration of the economy, it is likely that state-owned enterprises will not be able to repay the loan, and they will inevitably fall on the budget. And these debts are beginning to be talked about with concern in Russia, realizing that the prospect of getting their money back is becoming increasingly uncertain.

Is there any good news? This time, none. Either way, you’ll have to choose between a few very bad options. The political independence of Belarus already looks like a joke, there is a great danger that very soon all economic levers of influence will go to Moscow.

Unsubscribe time. What is happening with popular telegram-channels in Belarus

The atmosphere in state structures: apathy, dismissals, in a word, it’s been hell

Hub for transportation to the EU? Alleged route of migrants in Minsk