Civilian cars with “V” marks have been spotted in the towns of Belarus since the first days of the war. There were especially many cars in Mazyr, Gomel, Rechitsa, Naroulya, Khoiniki and Yelsk. At first, it could be said that this is how the Russian Armed Forces mark their personal cars, but these cars almost always had no license plates, which is a direct violation of the traffic code.

A couple of weeks later, there were more and more such cars in Belarus, and in mid-March it became clear that not all of them belonged to the Russian Armed Forces, and the highest traffic of such cars on Belarusian roads was recorded on April 5, after the Russian Armed Forces began to retreat from the territory of Ukraine. At the same time, the monitoring group of the Belarusian Hajun Project began to receive more and more messages from residents of Ukraine asking to find their cars, which had been stolen by marauders of the Russian Armed Forces from the temporarily occupied territories and subsequently taken to the territory of Belarus.

All these facts left no doubt that there are vehicles stolen from Ukrainian citizens among those with “V” marks that move from Ukraine deep into Belarus.

At around 06:00 on April 5, Belarusian Hajun Project‘s monitoring team detected a large column of Russian Armed Forces equipment moving from Gomel towards the Belarusian-Russian border. In addition to military equipment, the convoy included both passenger cars and civilian trucks without license plates and with “V” marks. A car with the logo of the Ukrainian Gavrilivski Kurchata trademark among the trucks immediately caught the eye. 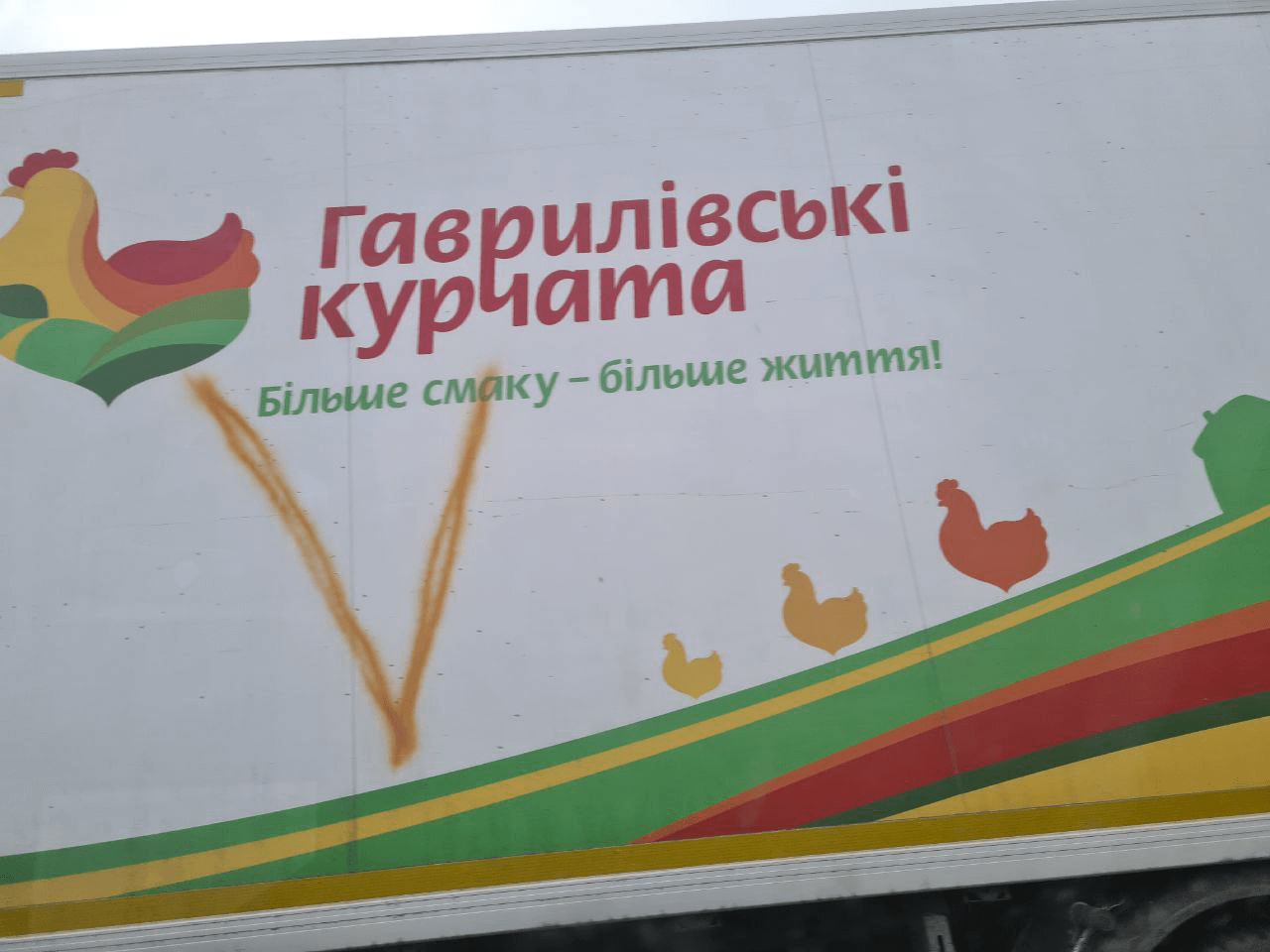 A truck with the logo of the Ukrainian Gavrilivski Kurchata seen in Belarus on April 5, 2022. / Belarusian Hajun Project

The vehicle of the Ukrainian Complex Agromars company, which owns the brand, was marked with “V” and had its Ukrainian license plates torn off. In addition, there is a high probability that such trucks also carried looted property from the Ukrainians. It’s also possible that personal belongings of Ukrainian citizens were taken out of the country in military KamAZ and Ural trucks of the Russian Armed Forces.

What civilian cars with "V" marks were seen in Belarus?

The Belarusian Hajun Project tried to collect and identify civilian vehicles with “V” marks, which went from the side of Ukraine deep into the territory of Belarus. Here is a brief list with photos. 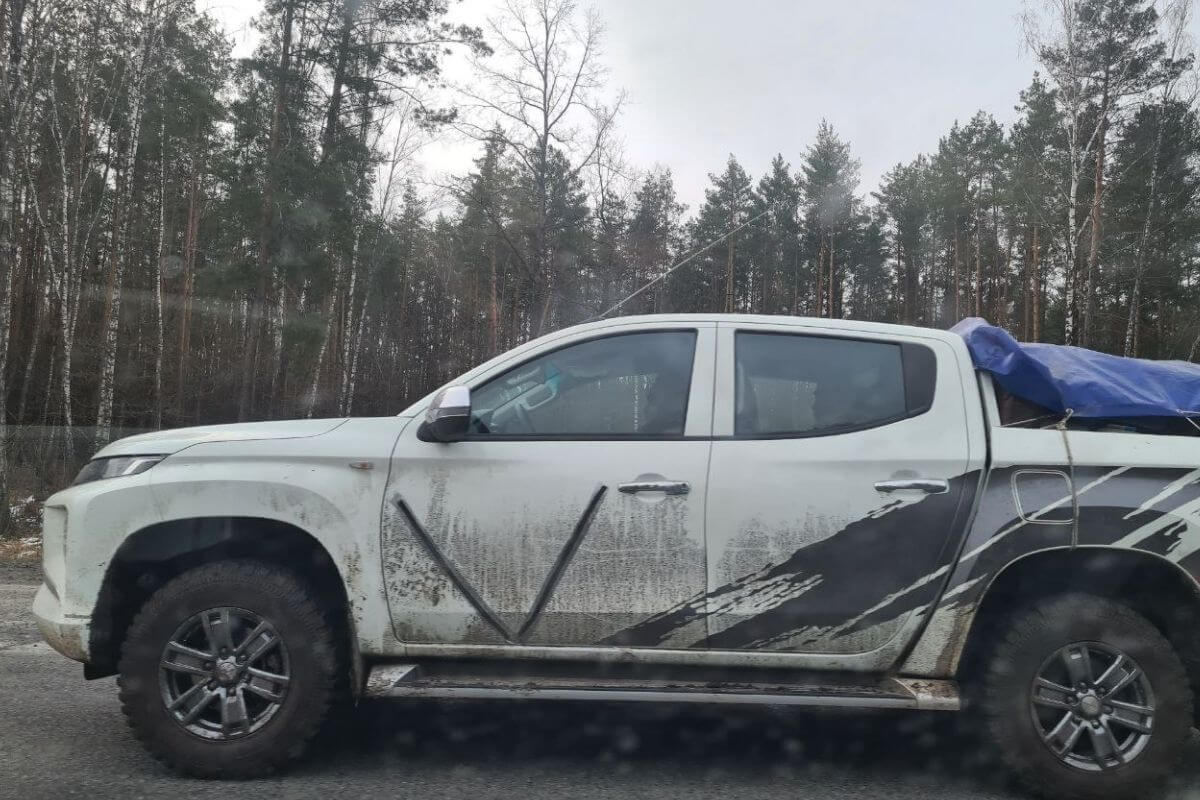 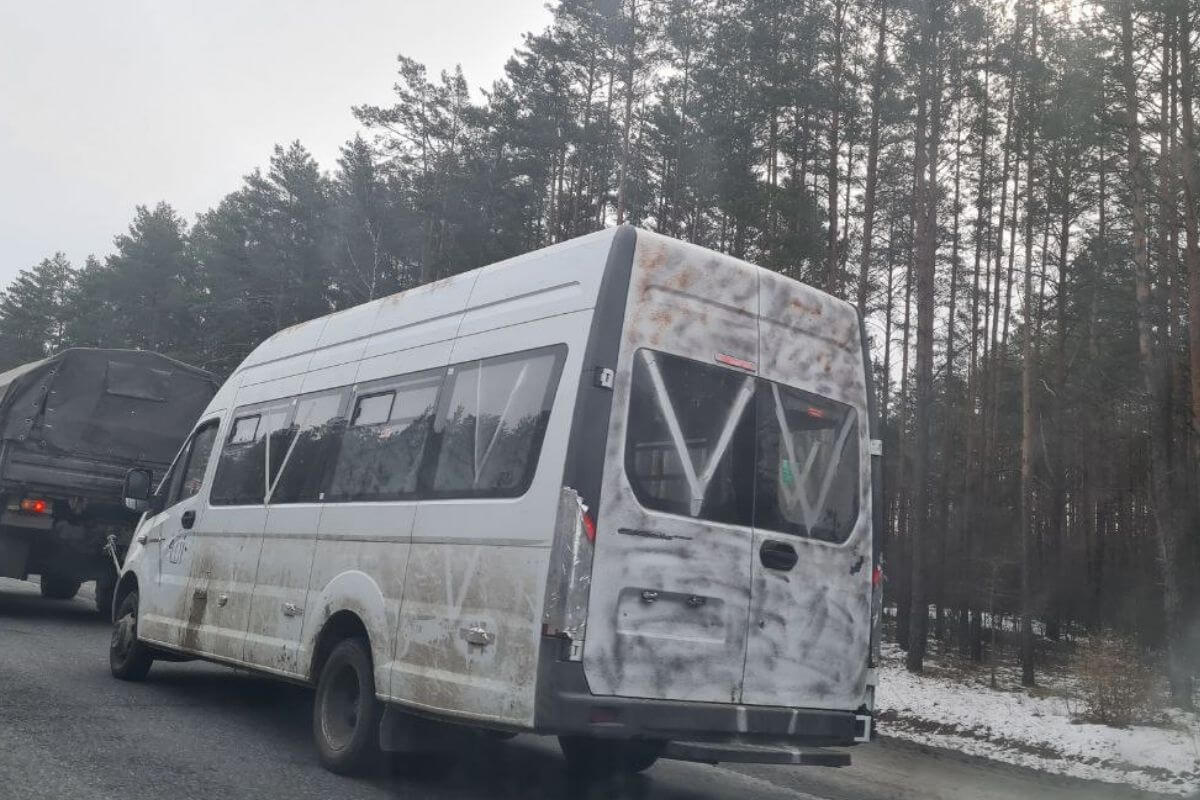 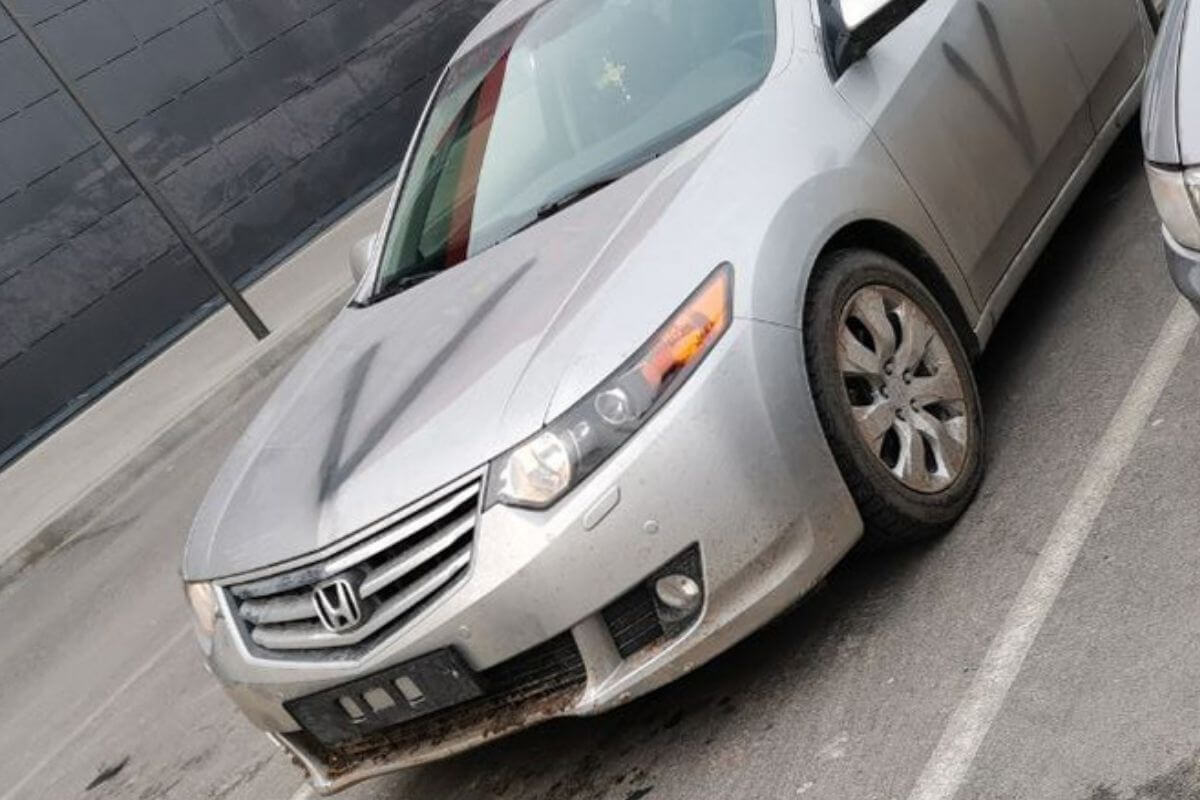 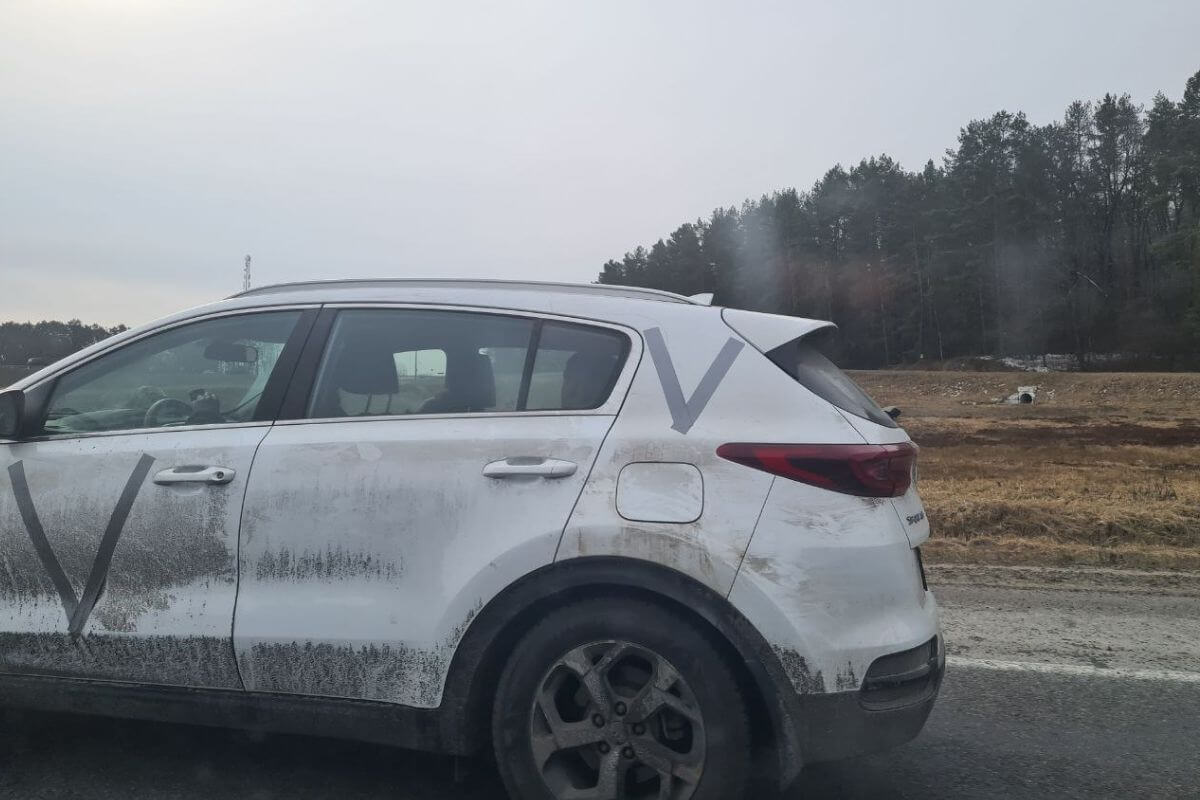 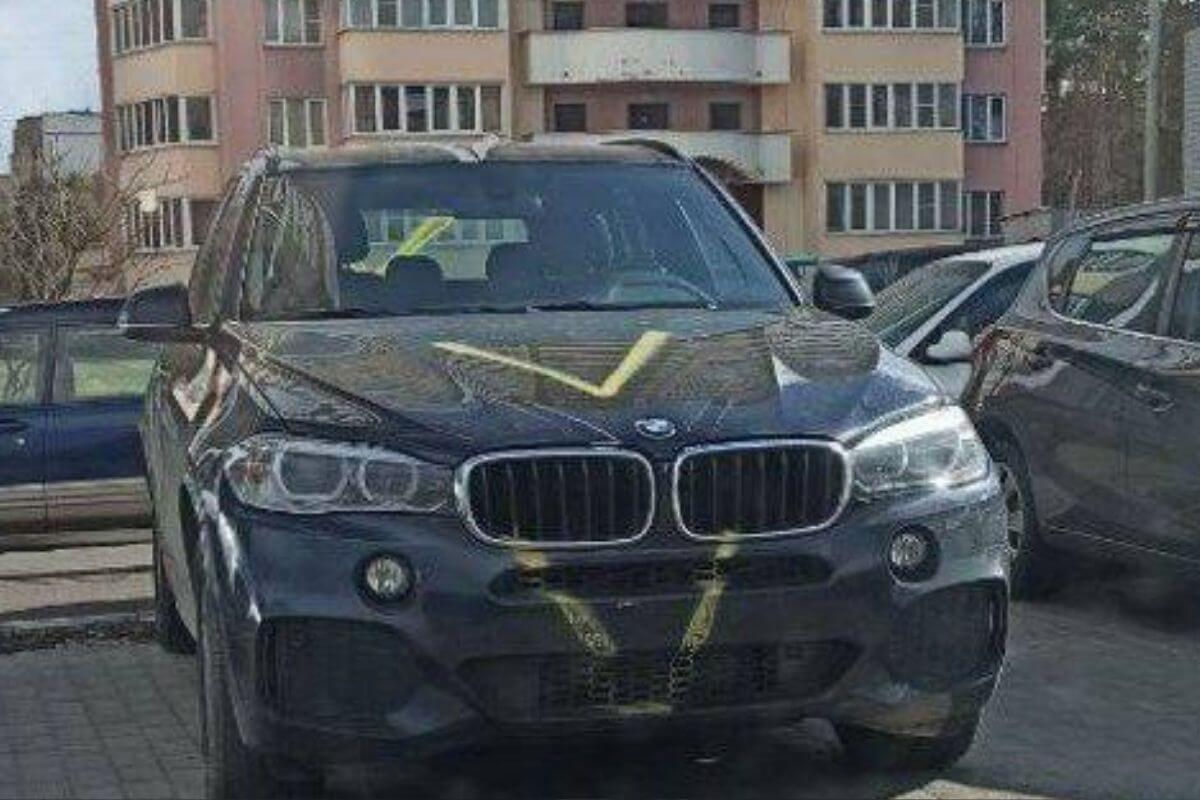 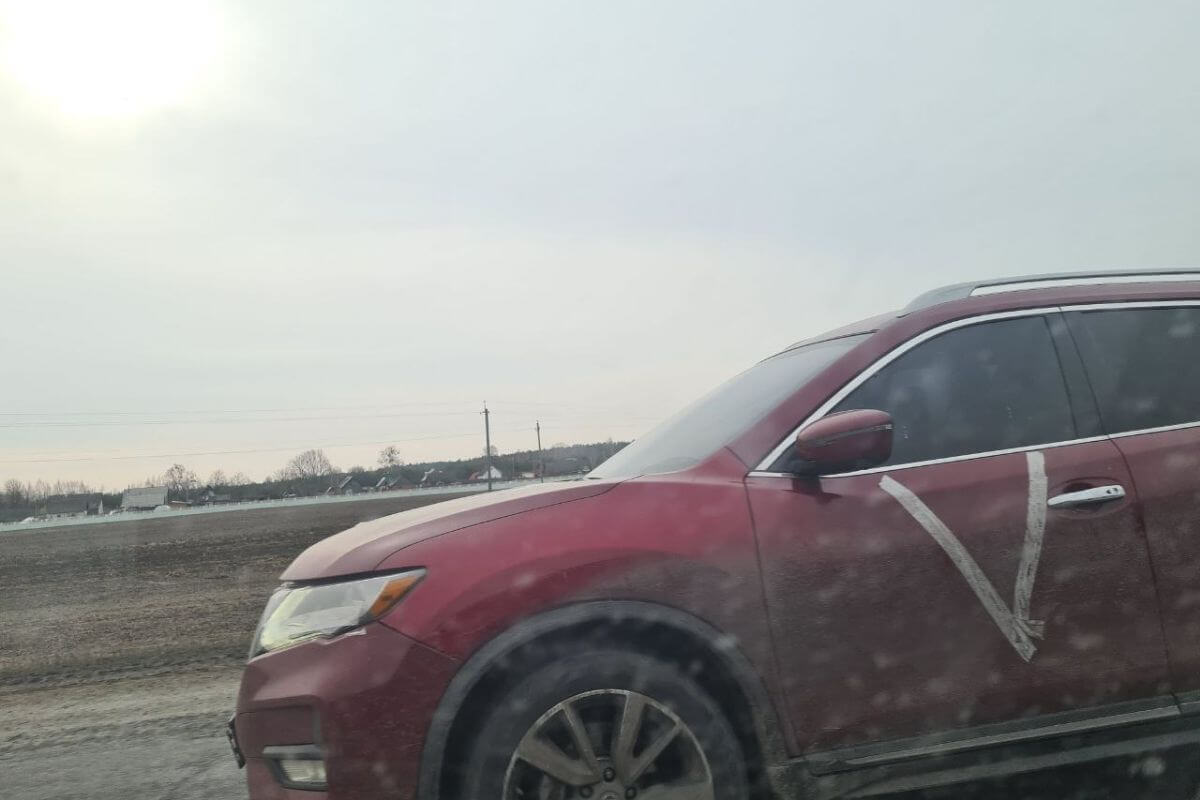 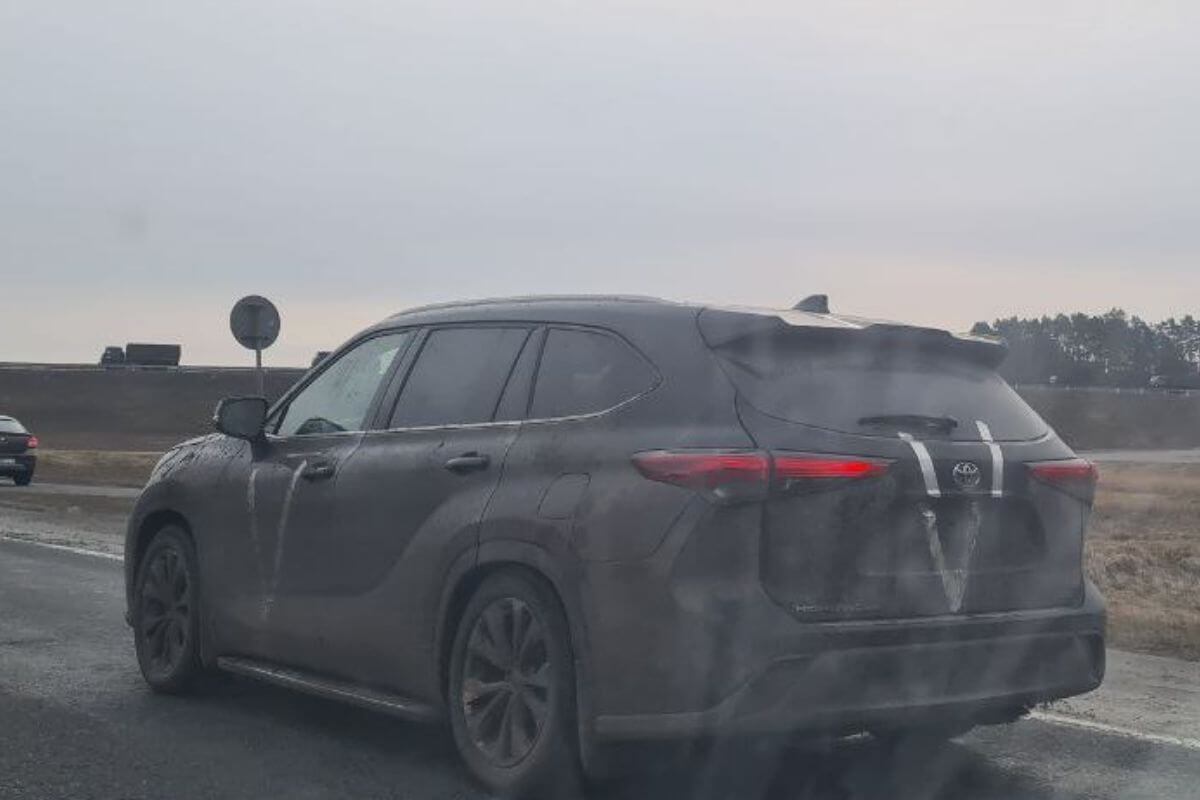 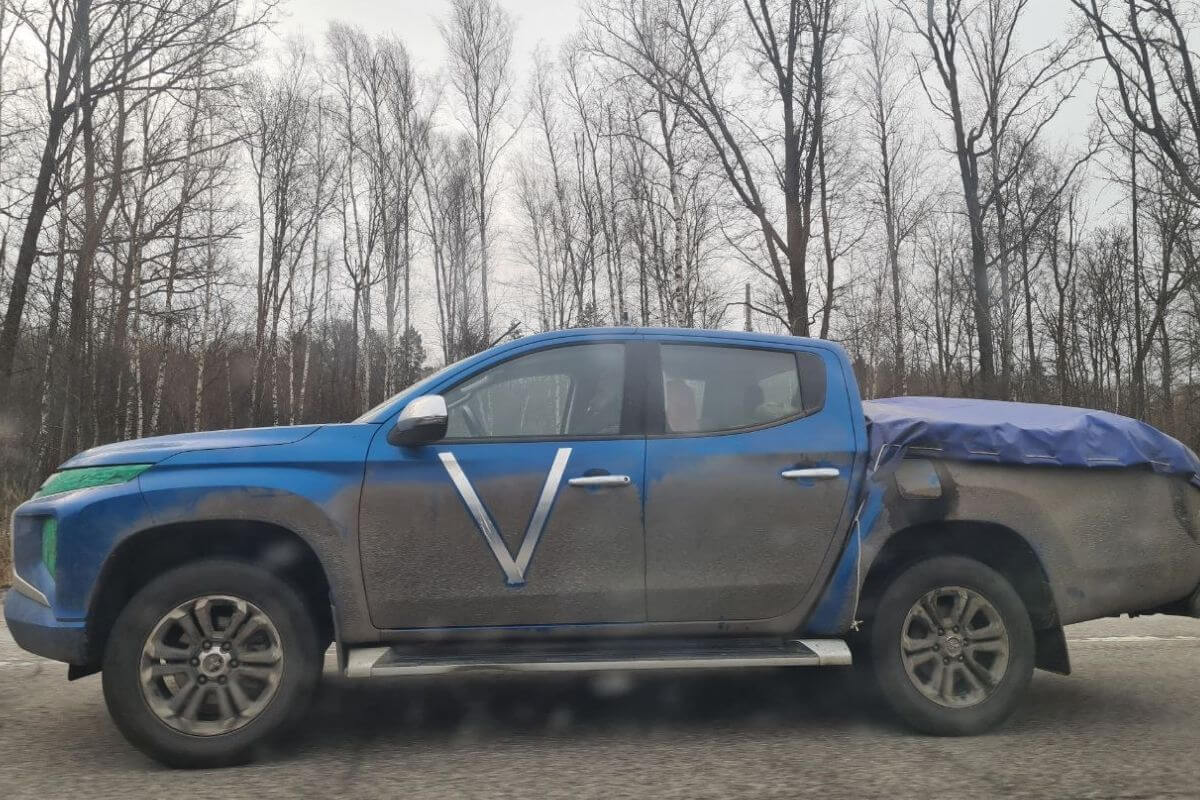 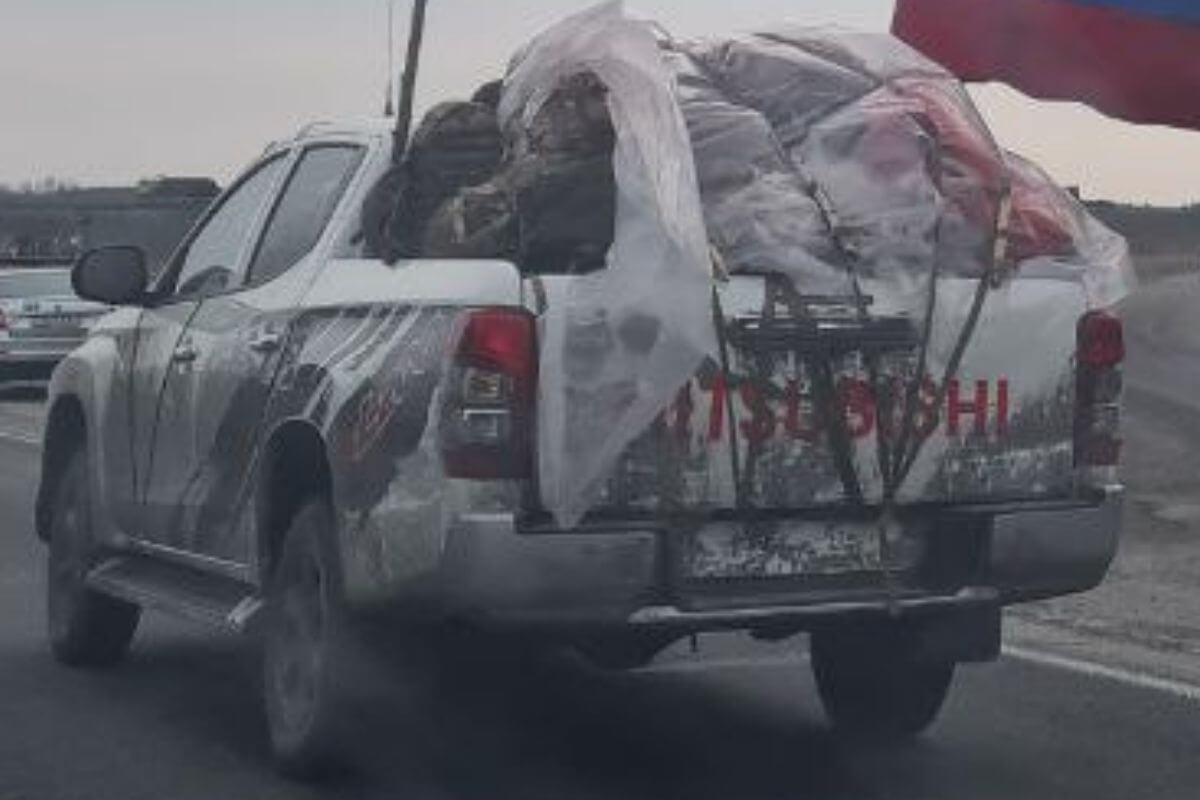 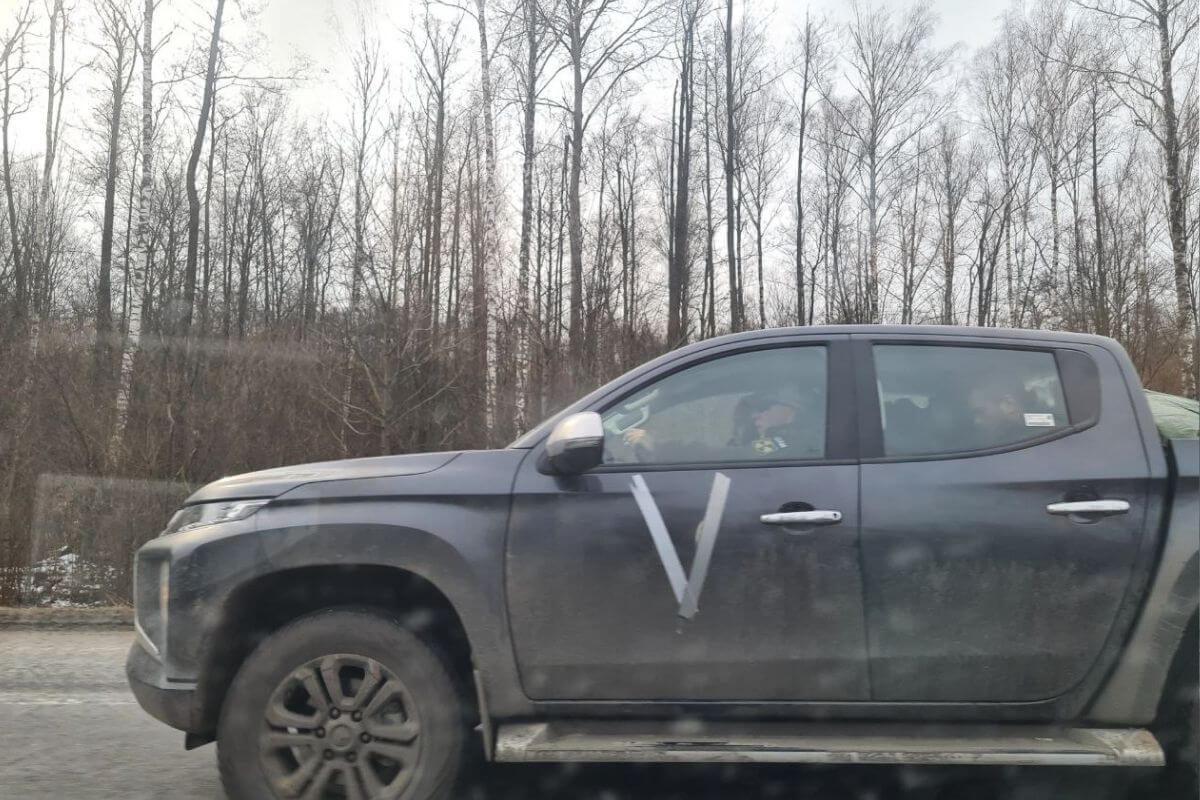 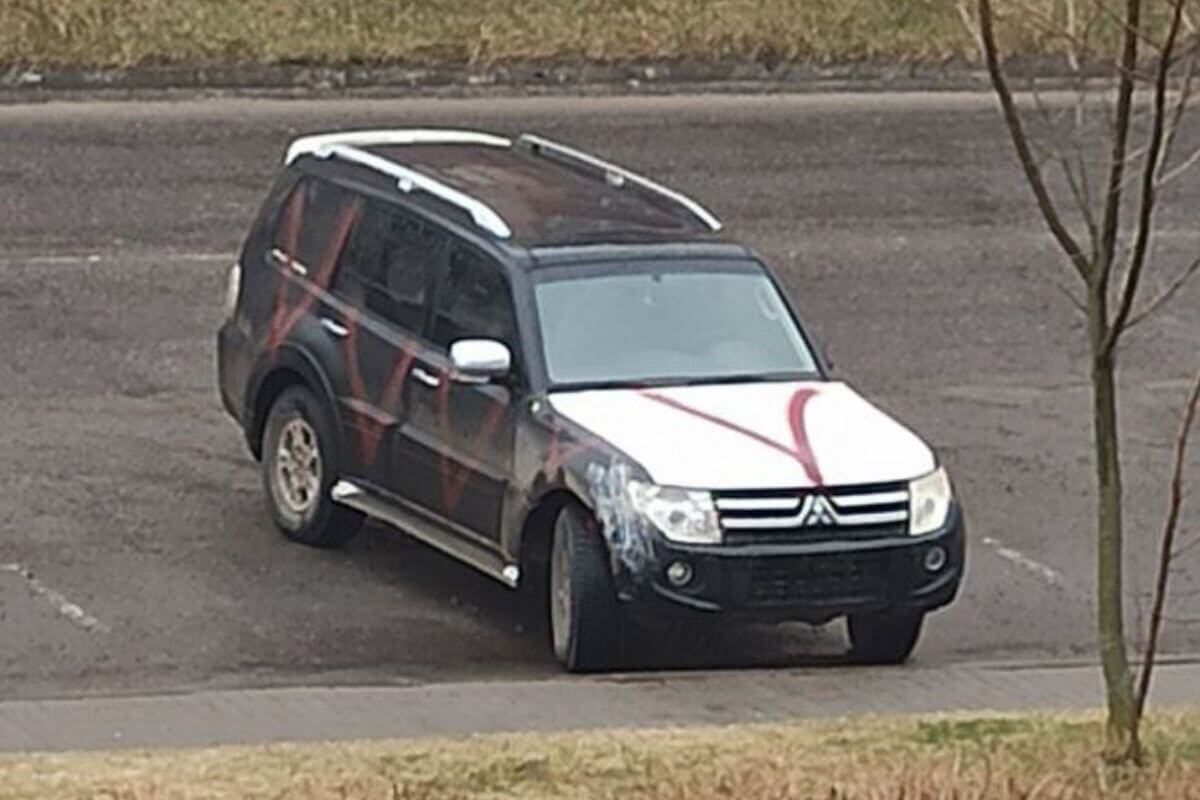 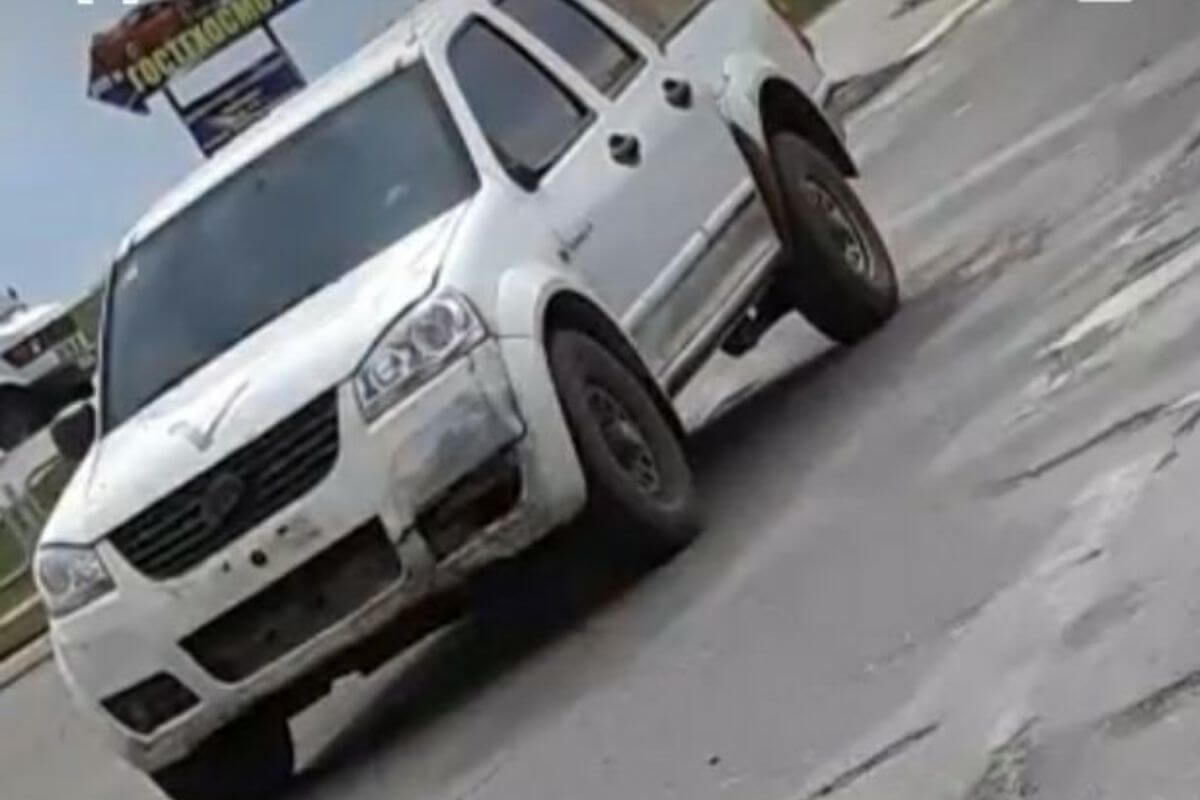 Not only cars, but also money?

In addition to stolen Ukrainian cars, there are other things that were reportedly stolen by Russian soldiers. For example, Russian soldiers tried to exchange wads of hryvnas in Khoiniki (Gomel region, Belarus), to which, according to local residents, they were told “There is no such option in this bank, exchange in Mazyr.”

However, they do change money in other banks, and there’s a question: Why do banks in large towns change money, when there’s a criminal liability for the purchase of knowingly stolen property? We note that if this money was stolen from banks, stores, or purses of ordinary people, then all cashiers are accomplices to the crime.

“Don’t they realize that they are accomplices to what happened in Bucha? What are the bank employees thinking? With the money they get exchanged, they buy household appliances, food and Snickers bars,” residents of Belarusian towns say perplexed.

The fact that Russian soldiers suddenly got a lot of money is evidenced by their sharply increased activity in the Katapulta and Babrouski shopping centers in Mazyr (Gomel Region, Belarus). According to local residents, soldiers buy household appliances in electronics stores and gold in jewelry stores, where they go shopping in groups of 6-10 people. 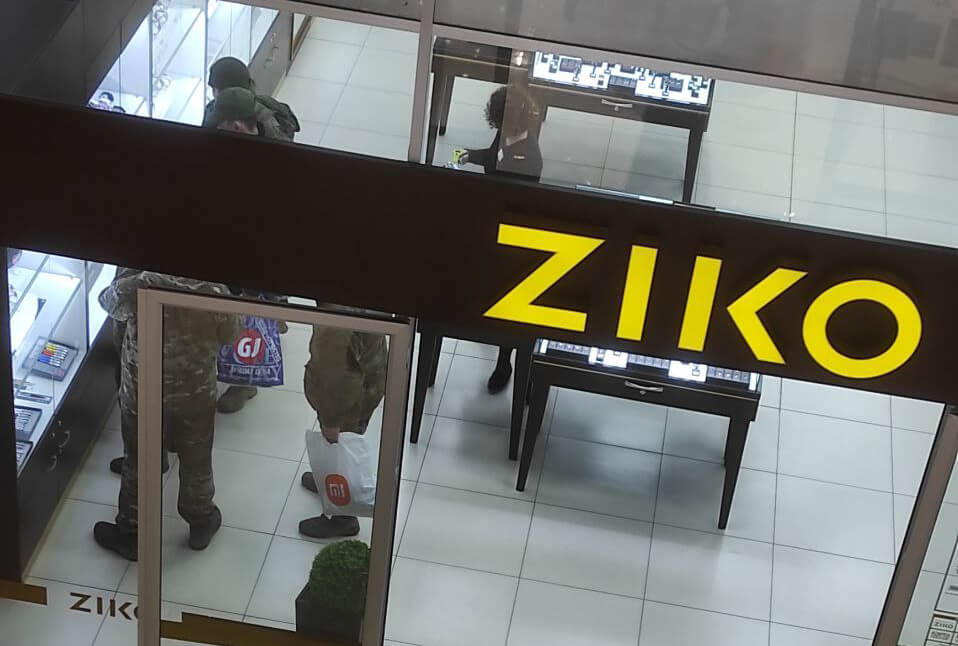 “There were people with “GJ” bags in one of the stores. There’s Gloria Jeans & Gee Jay company only in Minsk and Mogilev. Where did the military suddenly get such bags during the exercise? Where did they get so much money that they were able to buy so many things for themselves?” (Update: there’s Gloria Jeans store in Mazyr too).

And yes, indeed, it is possible to assume that the soldiers simply want to save money and buy some things cheaper than in Russia. But this version runs counter to numerous reports from local residents about the behavior and spending of Russian soldiers in entertainment venues, bars and clubs. Gomel residents say that there are now more soldiers than ordinary people in such places in the border areas of Gomel region.

A crowd of Russian soldiers celebrated a “special operation of stealing scooters and TV from Ukrainians” last night.
This event took place at the Sputnik center in Mazyr (Gomel region, Belarus).
1/2 pic.twitter.com/AYUKCTaRGt

You can subscribe to the Belarusian Hajun Project and our Twitter, you can also report anonymously any information concerning the Russian Armed Forces soldiers and movement of military equipment on the territory of Belarus to the monitoring group via @HajunBYbot.