Opinion. Alexander Friedman on the draft law on the “Genocide of the Belarusian people”

Photo from the personal archive of Alexander Friedman
3 mins

Historian Alexander Friedman in his telegram channel published an opinion on the new draft law on the “Genocide of the Belarusian people” and the reaction to his words from the Belarusian propaganda. We quote his words unchanged.

A draft law on the “Genocide of the Belarusian people” has been published, which was introduced by Liliya Ananich, the deputy of the House of Representatives.

The project not only puts an end to the unbiased study of the history of the war in Belarus, but also provides for huge fines. Denial of the “genocide of the Belarusian people” can be followed by a prison sentence of up to 5 years (and the second sentence- up to 10 years), and citizens who lived on the territory of the BSSR during the war and the post-war period are absurdly called the “Belarusian people”.

Thus, the Lukashenko regime “appropriates” the victims of the Holocaust, declaring them for propaganda purposes a “Belarusian people”: the words “Jews” and “Holocaust” are expectedly absent in Ananich’s project. And this is another gross distortion of history and the mockery of the memory of the Holocaust victims that has become habitual in Belarus.

My comment on the Ananich project caused hysteria among propagandists. And that’s a good thing! 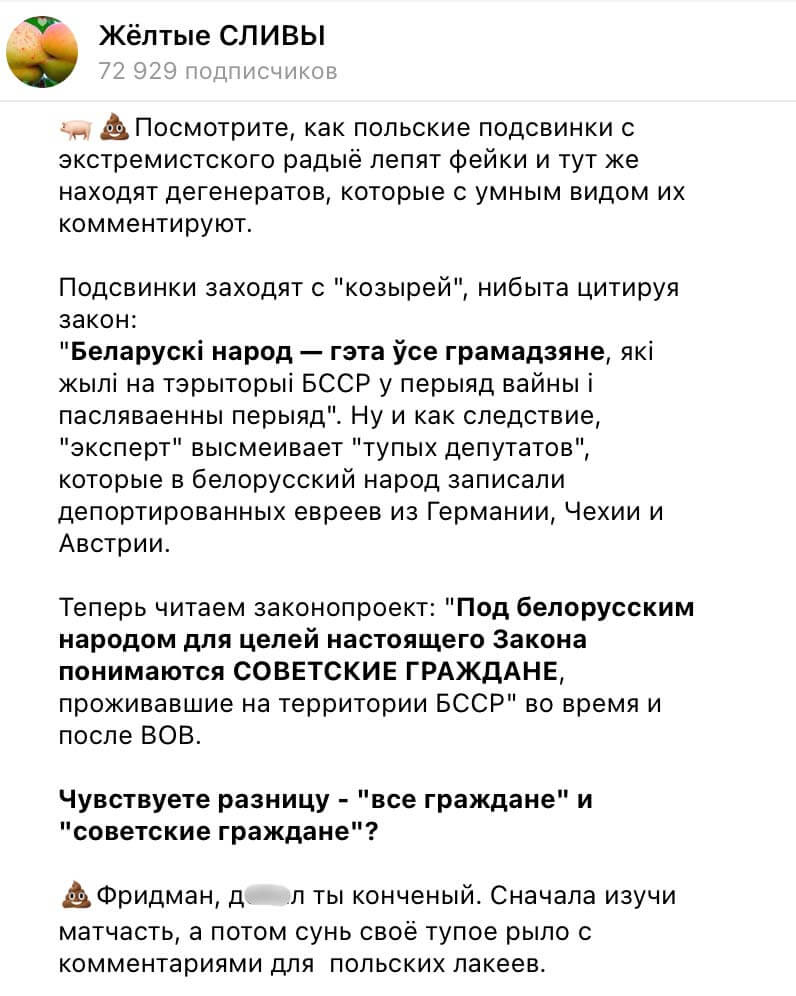 At the same time, I want to stress the main aspect once again: with this project, the Lukashenko regime declares virtually all the people who died during the war at the hands of the Nazis and their accomplices on the territory of Belarus victims of the “genocide of the Belarusian people”.

And it should also be noted that the authors of the project did not have enough intelligence (there is no point in talking about conscience of Lilia Ananich, who calls the situation on the border of Belarus and Poland “genocide”, in principle) to camouflage their trick with the controversial, but relatively neutral wording “genocide of the peoples of Belarus”. They need “genocide of the Belarusian people”.

"Repeating the sanctions story in Russia": Economy expert on how the embargo will affect Belarusians

Opinion. "Volka nogi kormyat" on how there're less reasons for joy the country

Opinion. Artyom Shraibman on the telephone conversations of Borrell and Merkel with the official Minsk

Opinion. “Nick and Mike” on the degradation of the Academy of Sciences

Opinion. “Nashy groshy” on the growth of foreign exchange reserves in October