Is the command center of the Belarusian grouping of the Russian Armed Forces located near Minsk?

During the so-called “Union Resolve – 2022” exercise, MotolkoHelp telegram channel reported about repeated violations of the restricted area of Minsk National Airport by Russian Air Force helicopters. However, these were not the last violations, and cases of unauthorized access to the controlled airspace of the airport (CTR) periodically occur up to this day. For example, on March 7 at 8:50 a.m., a Russian Mi-8 helicopter with registration number RF-91161 deviated from the route and flew in the restricted area of the airport without permission right at the moment of the landing of Belavia BRU730 flight from Kutaisi. 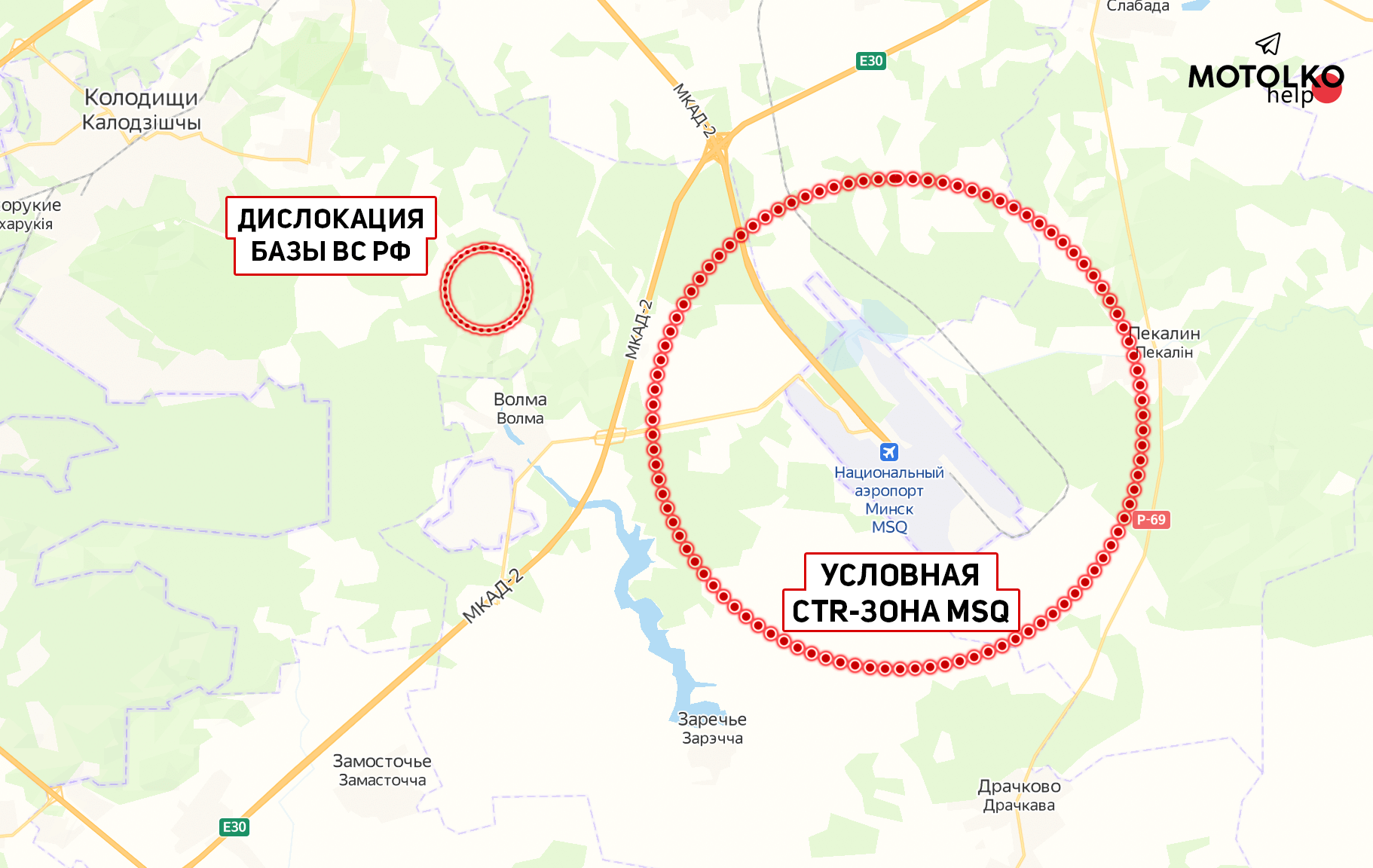 Approximate location of the Russian Armed Forces base and MSQ CTR zone / motolko.help

Our monitoring group knew about the presence of Russian troops on the territory of the former military unit 41738 in Volma both from our own sources and from the reports of local residents.

However, since the beginning of March 2022, pilots of civil aircraft taking off and landing at Minsk National Airport have regularly reported problems with the GPS/GLONASS navigation systems on board, including a lack of signal or incorrect navigation operation. This information is also confirmed by the presence of strong electromagnetic interference of GPS/GLONASS signals in the area of Minsk airport, which enthusiasts began to observe from March 1, 2022, till present time.

And today all the new GNSS interference in that region is completely gone. pic.twitter.com/zUJP85OLf1

Similar problems were reported by the Israeli media in February 2022. It is known that Israel sent an official request to the Russian authorities that the defense systems operated by Russia at the Khmeimim airbase in the Syrian port city Latakia are causing electromagnetic interference in the GPS systems of aircraft landing in Tel Aviv, and endangering the lives of passengers.

All this shows that an electronic warfare system (EW) is installed at the so-called “Site 400. Kupol” near the village Volma, which probably protects something more than just another Russian military base, of which, unfortunately, there are quite a few in Belarus. Not only its presence there right now affect the (un)safety of civil aviation flights, but it also marks another potential target for a retaliatory strike right near the Belarusian capital.

In addition, similar problems with GPS have been recorded in the border area of Belarus and Ukraine since the beginning of hostilities.

If you have more information and want to share something with us anonymously, please write to the bot of the telegram channel “Belaruski Hayun” – @HajunBYbot or via the contact form below.

"There is no pipeline from the oil refinery to Ukraine": How the Russian Armed Forces refuel equipment in Belarus

A plane or a helicopter crashed near Luninets

Dosov, the director of Aivitam, left Belarus after his release

Zubr.media and xx2022.org websites were blocked in Belarus for calls to “disrupt the referendum”

Verification of a pro-governmental sociological research